ALBUM NEWS:
Going to be checking in this week, not much on that front. You know what would make my producer SUUUUPER happy? Buying his new album, Solaris Part 3!

MUSIC NEWS:
Finished some lyrics this weekend, recording vocals this week, and hopefully releasing something next SQR!

KICKSTARTER NEWS:
Still in conversations with people right now, hoping to go with local businesses to try and get this stuff made. So far the feedback I've gotten haven't been THAT different than what I originally anticipated, so we're all good on that front.

I've put a poll up on the sidebar to get an idea of how much of each shirt I should bring with me to cons.

Recently, I put my money where my mouth is, and delved into Blender, using this tutorial:


It's for a special reward that I've mentioned earlier, but I want to email Valve first to ask them if it's OK to have an item as a Kickstarter reward.

DUMB SHIT I BOUGHT NEWS:
Got me a turntable.... THAT ALSO plays cassettes, CDs, AM/FM radios and has an aux in jack for MP3 players, and it currently sits handsomely on my dresser. Haven't played a lot of stuff on it, but so far it works, and it's good to free up space on my computer so I'm not distracted by clicking off on YouTube or Twitch and watching everything else. It's like when I listen to Slacker Radio when I work or am in the gym.

What record did I listen to? Well, you'll just have to find out on next week's Echo CHamber, which I'm starting riiiiiiight....now.

-I separated a mp3 of out Paul Blart discussion for animating purposes.

-Also not discussed on the Paul Blart discussion: Blartsonas. Like, I'd see people on Tumblr posting drawings of themselves with mustaches in mall cop uniforms- I mean, in their Mall Cop AU. Everyone would have their own shitty form of transportantion, like instead of a Segway, it would be a Rascal Scooter, or maybe a Razor Scooter, or even a ripstick.

You KNOW there's going to be one grimdark edgy motherfucker who's Blartsona's going to look like one of those also-ran emo bands from the mid-2000s, and try to chase people on one of these:

Malachite Black
AKA: Dark Shadow Lord
Age: 14
Transportation: Ripstick
Favorite Mall Stores: Hot Topic
Background: Dark Shadow Lord is an orphan who developed his magic shadow powers while he was in the orphange. All the rest of the kids made fun of him and didn't like him so he killed them all. Eventually a secret government agency (thanks, Obama) recruited him because he was the best at using his Dark Shadow Powers. Now he dispenses Mall Justice at his local mall where he brutally murders criminals with his magic shadow powers which he totally has.


-I REFUSE TO LOSE TO ANIME!

-Push The Baz for Smash. 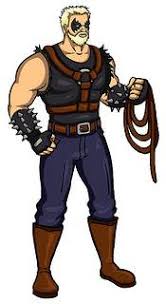 Can we talk about The Baz for a minute? Cuz I want to talk about the Baz.

Originally based off a rejected Street Fighter Design from an episode of the Two Best Friends offshot series Fighterpedia, The Baz is the hypest fighter to ever grace a console. CAN YOU FEEL THE STORM? He'd be Pikachu mixed with Captain Falcon

In addition to being used as a create-a-character in numerous wrestling games, Zubaz has also been the go-to character for a lot of the games the group has Kickstarted. Pictured above is his appearance in Divekick, where he originally KOed his opponents with a trail of lightning after his kicks. Later, he was revamped so he used his whip to swing into his opponents.

The next game he appeared in was Shovel Knight, where he appeared as a wandering fighter that appears on the overworld map. He still kept the lighting powers and the swinging, and kept a similar look to his appearance in Divekick. He still has two more appearances lined up, again, based off projects the Best Friends Zaibatsu Kickstarted:

From the fighting game Skullgirls, upcoming DLC fighter Beowulf has Zubaz's palatte (#24).(pictured above, with Woolie and Matt from Two Best Friends Play)

In conclusion, Nintendo, CAN YOU FEEL THE STORM?

I think if Rock Band 4 says, "Yeah, you can use this one too, we found ways to map it" then Harmonix won.
FUCK YOUR SKITTLES.

This is the jamest of jam weeks:


Twas slim pickings by the time I got to a record store for Record Store Day since all the exclusives were gone, but I got to pick up Black Flag's "Damaged" and an Iggy Pop live album.

Interesting I chose those two, since, well... this story...


I have tomorrow off, so I'll set up the turntable then. Was really tempted to buy an EXCLUSIVE RSD 7-inch turntable, but eh, I'm new to vinyl, so I really wouldn't know what to do with it. It's also one of those things I can buy at a thrift shop for like, 20 bucks.

Speaking Record Store Day, odd that on THAT DAY is when I compiled every song in one place on Status Quo Radio for the first time...


ALBUM NEWS:
Last two songs are being mixed and mastered, intertitals are being written, and a;; that's left is the Kickstarter stuff, which I've sent out e-mails for. They're great people I'm psyched about working with, so I'm pumped for these rewards, they're really going to be worth it.

Earlier I touched on vinyl, and as my compiling experiment went, it clocks in at around 43 minutes, which would make it juuuuust under the cut for pressing, if I'm ever stupid enough to go in that direction. However, with interstitial, I'm planning on having it clock in at around 50 minutes

NEW SONGS:
Finishing Dragons of Tarkir, and doing another rap song. After DTK is finished, I'm moving all my stuff of my laptop, and start new projects
Posted by Rhythm Bastard on 4/20/2015 No comments:


Saturday I went to a wedding reception to two of the nicest people when it comes to Florida Nerd Music: Rob (aka DJ RoboRob) and Shelby (aka Starby). A bunch of awesome DJs and rappers went on stage and it was a great time :D.

I met them at Omni Expo last year, and they watched me play a show out in the hallway. Super nice then, and nothing less since then. The best of luck to the both of them!

YOU GOT ALBUM NEWS, RIGHT?
You mean the album I finished?

YEAH THAT ONE
OK, the album I finished and released and is not awaiting final touches from production and kickstarter, right?

NO, WAIT-
Dino Hunter MD: The Sound Track will be on YouTube. It was something I should have done a while ago, but I will do with Status Quo Radio.
Why? Anytime I tell people I do music, one of the things they ask is  "Do you have your stuff on YouTube?" EVERYONE knows what YouTube is. YouTube has everything. It's not a music specific site like Soundcloud or Bandcamp or even this site, it a place they're looking for entertainment on anyway, and it'll bring all the traffic my way.

Also, I recently entered a partnership with DNOS Collectables, so go check them out! They'll be selling my stuff at Hatsume Fair Boca Raton this weekend! They also have cool anime collectables that you can get while you're there.

And, speaking of cons, I've been confirmed for Hero Hype!

Finally, a short movie I was involved in at GeekFest:

and the Blooper Reel:

Status Quo Sunday Catches You Up Before You Go Go

Missed last week... but will more than make up for it!


OK, so to make up for it, here's the big news:
ALBUM NEWS-
The last song has been send to Rob for mixing/mastering, meaning that the album is conceptually 100% done. After all that's back, production will kick in to high gear, but for now, I'm keeping it chill.

It's done. There's interstitial tracks left to work on, but A. Someone else may record those, and B. any work done with that can be done on my end since it's just removing the noise and leveling it out.

So, I'm going to spend April finalizing stuff for the Kickstarter, which will launch on May 1st, and while THAT'S going, put the finishing touches on everything.

Still trying to plug away at Dragons of Tarkir, but between finishing the album and Hurricon, that took a backseat.

Show went well. Had a few people just passing through, Everyone who stayed around for the whole thing loved it a lot and that makes me more happy than anything. No table, but gave out some posters and CDs to the loyal few.

I also saved like, 5 panels. I travel with A LOT of sound equipment, and for Christmas, I got a handtruck that made everything REALLY easy, so there was NOTHING I could handle.

Other than that, it was a really solid local con. Played some rounds of Magic, HMK was there, along with Paul St. Peter, the voice of Xemnas from Kingdom Hearts. I'm not a big anime guy, but it's a delight seeing all these pretty anime characters being played by guys who look like my Dad. It's sweet it it's own way!

Mad props to a SoFloConBro, Gaijin Takiyaki. DELICIOUS treats in a bunch of flavors! Unfortunately they were out when I got there.

MUSIC STUFF:
All my Rhythm The Bastarding songs are now available for download. I originally disabled it for the mailing list peeps, but I think the statute of limitations

Also, HOLY SHIT THE DEADPOOL MOVIE IS FOR REALZ!