LESS THAN 3 WEEKS UNTIL HOLIDAY MATSURI!

Crank your Holiday Matsuri up to 11 when Rhythm Bastard brings his mix of punk rock and fandom to the stage! You like video games? Comics? Card games? Come on down and open the pit up!
Holmat Slam  (5:00 PM, Panel Room A)

JAM OF THE WEEK: "Dead End In Tokyo" by Man With A Mission
<iframe width="400" height="300" src="https://www.youtube.com/embed/JjIiK9VcIsA" frameborder="0" allowfullscreen></iframe>
Daryl Toh, an artist on Tumblr, got me into Man With A Mission, an Japanese Rock Band that wear wolf masks. They do have a lot of "Anime Opening" type songs, but "Dead End In Tokyo" and "Dog Days" are closer to a sound from them that I want to see more of: spastic, hard and electric. Those two songs are the perfect soundtrack to a 3AM speed down the Turnpike.

It also helps that "Dead End" was produced in conjunction with Patrick Stump from Fall Out Boy. As fans of the show might know, I'm a sucker for those Fall Out Boy turns of phrase, and this does sound not too far off from what FOB has been doing on more recent albums like "Save Rock and Roll" and "American Beauty/American Psycho"

A new series I'm planning on doing where I play through some fun decks on Hearthstone and Magic The Gathering. Again, a small series so I can have something to do in the middle of the week.
Posted by Rhythm Bastard on 11/23/2017 No comments:

Status Quo Sunday IN YOUR HOUSE

Might not be ready by this Sunday, but sign up now, and you'll be able to download the new track "The Most Epic T-Shirt" and have the new song a week before it's released to the public!

Yup! Still got one (maybe 2?) more events for the rest of the year! Holiday Matsuri is always a big fun show, but I might be able to stay there Sunday night.


Crank your Holiday Matsuri up to 11 when Rhythm Bastard brings his mix of punk rock and fandom to the stage! You like video games? Comics? Card games? Come on down and open the pit up!

Malcolm Young, co-founder and rhythm guitarist for AC/DC died on Saturday. They were a huge influence on me, and Malcolm provided the base upon which some of the greatest rock songs of all time were built on, that still hold up to this day.

My attitude now is the same as to when David Bowie passed away: look at his legacy, and find someone now who is looking to carry that torch forward.

NEW SERIES COMING SOON!While I'm still trying to stream more regularly, I'm doing a series called "Rectangular Reckoning" where I play through a deck in either Hearthstone or Magic The Gathering for an hour and break it down. I'll also do some Arena runs in Hearthstone and some drafts and stuff in MtG: Arena when that comes out.
Posted by Rhythm Bastard on 11/19/2017 No comments:

Status Quo Sunday Is Done Working For The Weekend

This weekend was busy as hell, but I managed to remember enough for at least one paragraph each.

I knew it was going to be hellish going in, because we had a 3000 Brigade rehearsal at 7:30 in the morning. My show was at 3 PM, and I was starting to feel under the weather at this point. However, an early morning workout and nice hot shower later, I was ready and raring to go. A lot of the changes I made to my live show at Fantoku went over well! People were coming in more and more as the show went on, so it wasn't necessarily the worst thing that the previous panel started a little long.

I DO have footage from the show, but I need to check on it.

After 6 months of rehearsals and missed podcasts, it was showtime. We opened the doors at 8, and did a little preshow where the actors, in character, interact with the audience before the show proper starts. For me, most of it was as a boy band member thrusting my crotch in strangers faces and snubbing cheerleaders. Which for me, is "Wednesday". 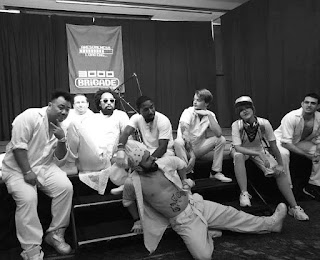 We are not allowed to release anything about the show to the public. In every 3000 Brigade production, there's characters that are part of every show (Mario, Luigi, Peach, Red Link, etc.), and then there's "secret" characters integral to the plot.

In this production, Rick and Morty travel to the 3000 Brigade Dimension's past, and with the help of Lucio, Tracer and Zarya from Overwatch, attempt to influence Mushroom High's election so that Daisy does not lose to Waluigi for class President. Hatsune Miku is Waluigi's girlfriend. Blathers from Animal Crossing, Bayonetta and the male Wii Fit Trainer are all teachers there.

Keep in mind, we've run through show over and over again, so by this point we know the show, are familiar with the jokes, we know who's in it.

The pops when each new character came out, the laughs to each joke, the WAAAAs whenever Waluigi showed up was like I was doing everything for the first time again.

Everyone I talked to afterwards loved the show, and it was a rousing success.

I couldn't have gone through all of this with a nicer group of people. 10/10 would do again. 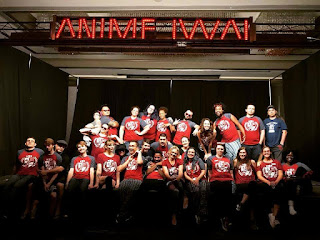 And because I'm insane, I had something to do on Sunday. 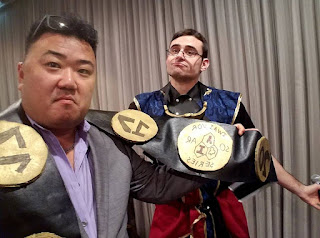 Iwai-vor Series is the Tag Team Edition of my "As Of Yet Unnamed N64 Wrestling Federeation" Event. A bit of a risk, since I didn't know if I could get enough people to do a proper tournament.

We had 7 tag teams. Turns out the real risk was that nobody wanted to use the Tag optio. Still, a huge thank you to anyone who showed up and an even bigger thank you to our champs! 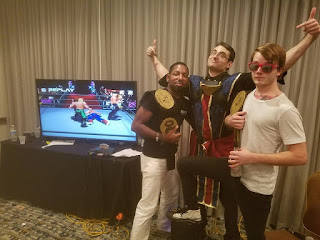 Also I look like that because I went in my Ral Zarek cosplay to the runway thing.

NEW SONG: "The Most Epic T-Shirt" (From Patreon)


My first Patreon Song, now available to all of you!

This was an idea I had for quite a while, looking at all of those crossover shirts both legitimate (See my song "Think Geek Is Not Nerdcore") and illegitimate (See, like 90% of Redbubble, Etsy and Your Local Con).

So really, why not just make a T-shirt with a million references on them?

And yes, the T-shirt will be real... very soon.

ANIME IWAI IS THIS WEEKEND! Just a reminder of the events I'm going to be at:
Hardcore Nerdcore Punk Rock Featuring Rhythm Bastard

Saturday, November 11th
3:00 PM- 4:00 PM
Panel Room 2
MY CONCERT! Again, working on the setlist for this one is fun, since I can throw in SO MANY more new songs, and I'm working on having a new piece of merch ready by then.


I just got off of Fantoku: An Orlando Nerd Fest Show, and I'm ready and raring to go with a killer new set!

Saturday, November 11th
Doors Open at 8:00 PM
Main Events
OR Fast Times At Mushroom High
The 3000 Brigade is the largest active cosplay performance troupe in the country! They are proud and excited to bring their next performance to anime Iwai. It is a comedy variety show with amazing costumes, wild sexy dancing, stage combat, and many of your favorite beloved characters acting very inappropriately. This year marks a decade of 3KB shows. Please come celebrate with us!

I did this late, and RAW is on, so I'm kinda rushing through all of this.

Saturday, November 12th
3:00 PM-4:00 PM
Panel Room 2
A Tag Team Throwdown where you and a partner can pummel your way through the competition to win the Championship Belt! There will be thrills, chills, spills, and maybe one of the commenters will wear a silly costume!

It will be on WCW/NWO Revenge for the Nintendo 64 until we can find another game. Bring your own Nintendo 64 if you want to ensure that they'll work.

I forgot to post it up on here because I was given the slot 48 hours before the show, and I was ALL HANDS ON DECK preparing. The great thing is that I tried a lot of new stuff with regards to my live act, and it went over well! Look forward to that for future con shows!

I played the opening slot on Saturday, and there were people there ready to rock out! Unfortunately, there might not be much in the way of video, since the stream wasn't up by the time I began.

However, there will be pictures, some of them shirtless!

Overall, it was great to see everyone again after so long. Orlando Nerd Fest's description isn't kidding when they that it's also part family reunion. While Orlando is probably the capital for Nerdcore music, there's a lot of us spread throughout the country, and major events like ONF and MAGFest are good opportunities to reunite with people you've only talked to and worked with online. I got to meet with Twill in person, watch her crush her set with Wreck The System and reenact the infamous MIRACLES! scene, I got to see DJ Roborob after so long, and I reunited cool Orlando guys Marc With A C, Eye Q, Sci-Fried, Jackson Parodi and Ben Briggs.

I challenged the lead singer of Sci-Fried to Hearthstone, because they have a song called "Boom Boom C'Thun". He declined, because he knew what would have happened: For breakout acts, ONF 2015 had (in my opinion) SkyBlew and Navi. This year, was Wreck The System's year to shine. 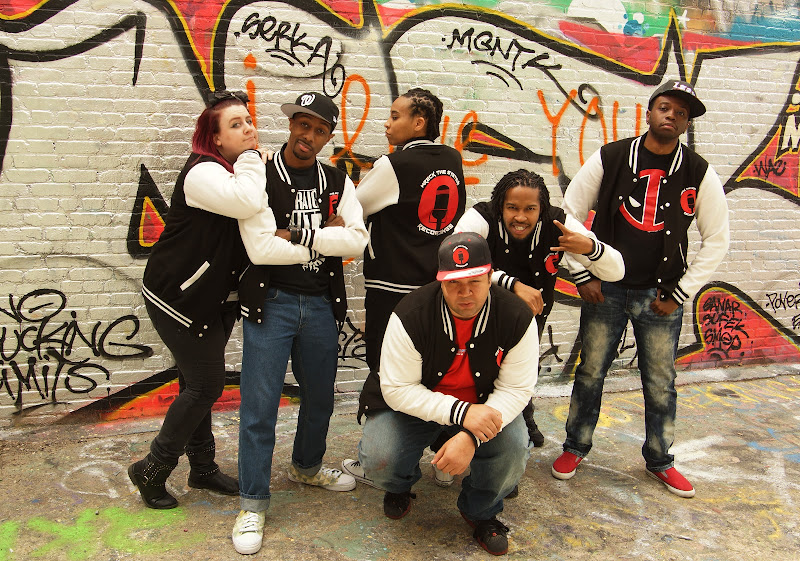 Wreck The System are 4 MCs (Cam3, Lady J, Osiris Green and Twill Distilled) who've banded together to create awesome music and put on kick ass shows. Seriously, they were intense and their stage show was well choreographed.

Which I can aprreciate, since 3000 Brigade practice is making my body feel stupid.

JAM OF THE WEEK: "Berserk" by Wreck The System

They have another single that release last month, "Hotel Party", that captures the feeling of 1 AM debauchery on the Friday Night of a con, but this one better shows  their skills on the mic.