Status Quo Sunday Is A Volcano

I'LL SEE YOU JABRONES IN THE ELIMINATION CHAMBER!!! WHICH IS IN AN HOUR!!! FROM THE TIME I'M WRITING THIS!!!

Stuff is out of the way, I'm free to get back to songwriting.


Also, uploading some of my old stuff.

No podcast this week, but next week I'll be doing the Pre-Show for NXTarRival.

P.S. Daniel Bryan lost the Elimination Chamber in a fuck finish so it's Batista vs. Orton at Wrestlemania. The only way this can be saved is if Deadpool comes in all like "FUCK GUARDIANS OF THE GALAXY, HERE'S THE TRAILER FROM MY MOVIE" then Kanyon Kutters them both.

WE CAN DOWNLOAD THIS PODCAST AND I RESENT MY DAD

-It seems like it's the Jeff, Bastard and Arcanon show...

-Here's a drink to have while listening to this episode called "The Dirty Girl Scout"
-Alternative Rock?

-The very first thing I thought of when Arcanon gave us the title of his grindcore song, this is the first thing that came to mind:


-All right, another story:
Wanna know how I got into the Studio Killers, and electro/dance pop band that's reminiscient of The Gorillaz? On Tumblr, there was a cosplayer who did a really good RED Engineer from Team Fortress 2, and looking through his other cosplays, among them was The Bouncer from their song "Ode To The Bouncer": 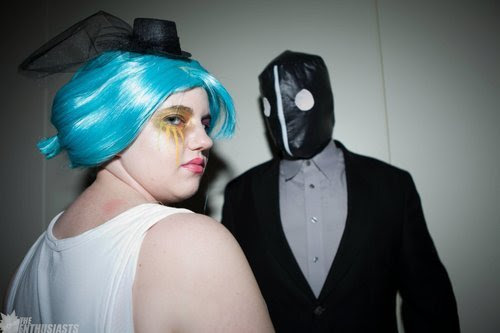 They're an act that's slowly, but surely catching on.

-Weirdly enough, my Dad got me to take the plunge and be a Green Day fan (a thing more difficult to admit as their career progresses). We were pulling in to the driveway, as "Brain Stew" came on. He was like "Who are these guys?" and I said "Green Day". He put on his shades and said "I like em!"
Later we went to best buy to get some CDs from him because he's old and those are somehow relevant to him.
That May, we picked up 21st Centrury Breakdown, and he played the shit out of that thing, but because it's the first album we enjoyed together, it'll always hold a special place. :)


-Enough turgid crap, DO YOU KNOW ABOUT PHOENIX WRONG?

You wasted 5 hours, you're welcome.


Finished a bit of writing I was stuck on, been playing more Rocksmith (streaming soon?), and laying the groundwork for later in the year, by assembling my stuff on Reverbnation.

Also, posting my stuff on this new site Kicktone.

I've yet to play around with it, 'cause right now it seems like an alternative to Bandcamp. How good I'm not sure, but I figured it couldn't hurt.

That Green Day Cover Project has started, with a poll on the side for the 1039 Smoothed Out Slappy Hours Song you want me to play. LIke I mention, just a little side thing so that I'm productive when I don't have a new song idea.

What can you expect to see this week?
-New video pertaining to Pensacon
-Podcast recaps
-A post on stuff that's near and dear to my heart that will be adapted into movies soon
-Streaming Rocksmith, so follow now.
-Also gonna do some more songwriting, as always :)

Status Quo Sunday Has A Lot On Its Plate Right Now

Some Dino Hunter MD: The Sound Track swag to give away! Tumblr accounts are free, and you get a little extra something that I didn't mention yet.

Lotsa writing this week, including the first draft of the bio I'm using for many different purposes, mainly getting into cons, like the recently revived Miami Hurricon, Florida Supercon and Dragon*Con.

This week will bring forth two things:
-Fixing up the site this week, trying to get a header of some sort going. I'll need to see how much leeway Blogspot gives me in regard to design.

-A new project called "Idiot Cover Generations", where I do a cover of a song from each of Green Day's albums, from 1,039 Smoothed Out Slappy Hours to (at least) 21st Century Breakdown. Starting next week, you guys get to vote!

I know it's a lot right now, but my schedule and workload IS clearing out, so expect more stuff soon.
Posted by Rhythm Bastard on 2/09/2014 No comments:

WHICH IS NOW STATUS QUO TUESDAY. FUCK THE WEEKEND.

Anyways, this past weekend was petty good: I went up to Orlando, went 3-1 at the Born Of The Gods Prerelease, went to Universal Studios, and it was great. The new Transformers ride is like Spiderman but more intense, Spiderman is still great as always, and since being an adult who can go wherever the damn well he pleases, I could hop on the Single Riders line and ride all the coaseters I want.

However, I did notice a disturbing trend: the roller coaster is dying. A lot of rides nowadays are just "Here's some 3D glasses, sit down". But there's still a lot of good rides out there, like The Incredible Hulk and the Dragon Challenge in Islands of Adventure.

Music stuff? Yeah, I got my cord for Rocksmith back, and I'll get back to writing. I don't see the future being too busy, but I've got a TO DO LIST!

So for next week, I'm announcing two big things, hopefully both will get me out of this rut. One of which I'll spoil now:

TUMBLR GIVEAWAY!
It'll start next week, but keep an eye on the page! I'll be giving away a CD, a poster, a shit ton of Magic The Gathering cards, and a little extra something I got from a recent convention. I'll throw in a handwritten letter thanking you how awesome your are and MAYBE A SNEAK PEEK AT STATUS QUO RADIO....
Posted by Rhythm Bastard on 2/04/2014 No comments: