NEW PODCAST: I'd Rather Not Episode 122: "Hitler-Ass Hitler vs. The Emperor’s New Symbiote"

You are tasked with defeating an evil force and saving the world, but there is a powerful enemy at play and it’s trying to turn you to the dark side WOULD YOU RATHER: Your grandfather is secretly Hitler and he is back from the dead and is trying to make you evil OR your clothing is secretly an alien that is attached to you that is trying to bring out the evil within?
Posted by Rhythm Bastard on 1/24/2020 No comments:

Email ThisBlogThis!Share to TwitterShare to FacebookShare to Pinterest
Labels: id rather not, podcast

The City of Waterdeep has seen people captured within towers before, but has it ever seen an automaton captured within a church tower? Also, Kiir remembers the loan.
Posted by Rhythm Bastard on 1/17/2020 No comments:

And I've stopped giving a fuck. Not in a bad, "OH WOE IS ME KIND OF WAY" or the "Hahaha I'm SOOOOO OFFENSIVE AND REBELLIOUS (by telling the same hack jokes for years) I DON'T CARE WHAT YOU THINK (because I'm really doing this to have fascists suck my dick)" way, but it a "Why bother with regretting it?" kind of way.

You're going to get criticized for bullshit anyway so why not embrace your weirdness?

I was WAY busier with cons this year, and I got to play a lot of newer cons.

Megaplex- My first furry convention, the same weekend as AFO. I didn't know anyone there, since any of my usual con-rades but it was really easy to make friends at the Artist Alley where I set up my merch. And just in general, really.

That, and not having to be up on the latest anime made things a lot easier, since everyone is dressed as their OC.

Lumi-Con- The Halloween to Christmas's Holiday Matsuri! EVEN THOUGH PARKING WAS WAY EASIER! This was my first time being up in Tampa, and I saw all of my favorite people there, namely Symphonic Pheenix Force and Roborob.

Alright, let's get this on!

MOST RECENT SONG: "I Want To Fuck Krampus For Christmas"

I posted about it recently, but I'm still really happy with how it turned out. Between this and my Weezer song, "Remember", this was the a song where I felt like I was clever with my lyrics again, and I haven't felt like that in a while. It bodes well for 2020 ;)

Krampus was my favorite, and a lot of other songs were re-records, but the other song I felt really good about (that I might rerecord because that bridge was kinda weak) was "Mercedes Merced". It sounded the most profesional, and it's my writing at my most pop, but not it's still not too simple.

COOL SHIT I DID:
Play My Song About The Goon For Eric Powell, THE CREATOR OF THE GOON!

Held A Marathon Livestream
For 12 hours, April 27th, 2019, I streamed for 12 hours, with various friends of mine switching out between games to raise money for my transmission. It's the closest thing to me running a con, and it shares the same ethos: Here's a bunch of my friends who do cool shit, hanging out, talking about their cool shit, and playing some games we all enjoy together.

And I WILL be doing it again!

Once a season, just to promote fun things, cool people, and help with my con costs and production of merch.

Did music for a video game: RETROMANIA WRESTLING!
While I previously did music for a wrestling game, Suplex Saga, this one looks like it will actually come out! It fucking better since there are a lot of big names involved, like the Road Warriors, Tommy Dreamer and Colt Cabana!

Retrosoft Wrestling is currently holding IndieMania, a 32-man tourney of indie wrestlers, with the winner getting a spot in the game. So far there's been a pretty good spread, and a couple names I heard through the grapevine. Two of the guys I was pulling for just because I thought their themes would be fun to rework.

PODCASTS
RPG Pals Club- I started it this year, and it's so fun to edit. This is my first long term campaign I've been a part of, and every one of our characters and so well done, and so entertaining to work with. We each come to our PC with different philosophies and different goals, and Luke, our DM, has been MORE than accommodating.

I'd Rather Not- Yep, we're still doing this. Yep, still bullshit.


Last year's show was put up on YouTube earlier in July.

This year's show was a fun mix, since I got to be a Herald, Green Link, and Johnny Fucking Cage of all people!

TREND I LIKED THE LEAST: People Getting Booted Off Of Social Media For Calling Trans-Exclusionary Radical Feminists TERFs

TERFs are basically people who pretend to be feminists but talk like Mens Right Activists, putting women in very narrow boxes that, like MRAs, say that you only matter when you can breed. And seems to focus more on excluding transgender people than promoting women's rights.

They get very butthurt when you call them out on their bullshit, and always search out that term, claiming it is a slur. After SonicFox was banned from Twitter for saying "Fuck Terfs", I wrote this song:

"Fuck Terfs (But Don't Have Sex With Them)"


TREND I LIKED THE MOST: Milkshaking Fascists

They take it SOOOOOOO hard! They're a group of people who are only tough because the cops are there, and when you fight back anyway, it's like all that facade disappears.

So if you've got an asshole conservative relative, just beat their ass.

Those kind of people find disrespect the most offensive thing of all, and their reaction to a punch or a milkshake is mor

I first heard of this song after I found out it was the opening "Sexy Dance Number" for 2019's 3000 Brigade Show, and it's stuck with me ever since. Every time I listen to it, I find a new thing within the sound to obsess over, when it's a really simple song.

Listen, you can't knock the kid, Lil Nas X made some good music this year. "Weeeeellll..." has joined the ranks of "Some-BODY" and "IT'S BEEN" in the ranks of songs that you're complelled to sing the rest of when you hear that first line. Billy Ray Cyrus's bridge makes the song feel finished and provides a great contrast between young optimism and the cynicism of a One Hit Wonder.

His EP 7 was really good, and while his rapping isn't anything stellar, he knows how to work with the beat, whether it's new wave, punk, country, etc.

"WHY DID NOBODY TELL ME ABOUT THIS SOONER?" AWARD: The Switch

Backlog? Why not simply clear it out whilst on the toilet?

OLD GAME OF THE YEAR RUNNERS UP:
5. Super Smash Bros. Ultimate- I'm not that good, BUT JUST SHOVEL THE SPIRIT BATTLES IN MY FAACCE AAAAHH I LOVE THESE REFERENCES!

4. Bastion- 90% of this game is due to the omnipresent narrator's sexy voice narrating most every move I do, the other 10% being the flowing combat.

3. Golf Story- Imagine if someone tried to make Tony Hawk's Underground 2 with the engine to GBA's Mario Golf, which is the best way to describe how Golf Story takes a singular concept of "Golf" and expands it to make a fun story mode.

2. Danganronpa 1 and 2- As batshit and Very Anime as the story can get sometimes, this series serves up dramatic and intriguing mysteries that leave me in suspense of what's to come next.

Hollow Knight scared me way more than RE2 just through its environment alone: there's bugs every where, it's dark, and every new area you are in has you without a map until you can find the seller. If you die, you have to go on a corpse run ala Dark Souls, and even then, success isn't guaranteed.

And I loved every second of it.

The backgrounds and enemies are hand drawn, giving it this organic look that makes it feel more uncanny than if it were just cel shaded, and even with more "comforting" environments like the City of Tears or the town of Dirtmouth, there was always this overwhelming sense of dread and melancholy.

With every moment of relief in the stellar gameplay, I was further sucked into the world of Hallownest, with it's unique population trying to survive in a world that has long been left to rot.


NEW GAME OF THE YEAR RUNNERS UP:
5. Sayonara Wild Hearts- If I was more into Chvrches music, I'd put it higher because I respect the concept of a playable album so much.

4. Slay The Spire- StS takes my favorite part of Hearthstone, The Dungeon Runs, and expands it into a full on strategy game.

3. Resident Evil 2- Playing this coming off a run of REmake, RE 2 adds so many Quality of Life things, while refocusing the story to Anette Birkin in a way that signals that maybe Resident Evil would have been better off as an anthology series with more dramatic, unconnected stories as opposed to science fiction inspired by Romero.

2. Dicey Dungeons- I'm a slut for Roguelikes, but DD takes the concept of "you play it with dice" as far as it can go, seeping into the adorable character design.

I was up until 3 AM last night playing this, because there is ALWAYS another thread to pull, ALWAYS a new character you want to meet again, and ALWAYS a decision that can go horrifically wrong.

You play a detective who's lost their memory and is tasked with solving a murder, and then the game lets you go ahead. As you start to investigate, you find yourself embroiled in a union dispute that might force you to take sides to find out what's REALLY going on.

I was a fan of the Shadowrun games by Harebrained Games, because in addition to a well developed world, and interesting setting, each game has a focus on a central "hub" world that you return to in between missions, and develops as you get further along in the story.

Disco Elysium is similar, as it takes place within the small municipality of ficitional city Revachol, and while the map is maybe 3 city blocks large, it's packed to the brim with intrigue, conflicts, and writing that is at times the funniest thing ever and devastatingly bittersweet. Plus, everything looks like it was made with water color, which gives it a nice, hazy tinge that lends itself to the surreal and dreamlike story being told.

Most importantly, the game features VO by the cast of Chapo Trap House and allows you to be super Communist, so it objectively has the best politics

ANNUAL REMINDER I SHARE A BIRTHDAY WITH MC BAT COMMANDER 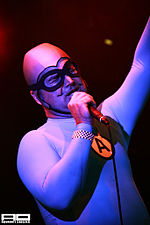 Yeah, so for future reference, anytime I do something new, I'm going to make a quick post about it.

NEW SINGLE! "I Want To Fuck Krampus For Christmas"


A song about love on Christmas. Krampus is the new hotness on the holiday season, baby! I was going to do this on the guitar, but when I got into Reaper, and played around with the synth, it sounded REALLY GOOD!


Part of my "Resolutions" for 2020 is to make a proper Sizzle Reel for my live shows to show off to potential cons and venues, but this had so many good moments and was such a good feeling to have all my friends from 3000 Brigade support me!

The City of Waterdeep has seen bands with grudges before, but has it seen one with a grudge that is out for revenge against a friend slash teammate? Also, Nivenya goes into a hole.

Our cleric gets very pupset, and Oi is a jerk to robots.