-Jeff DID visit me in Florida, and we did hang out, and it was good. WE FOUND A BOWLING ALLEY! Seriously. We were in City Place in West Palm Beach, and we come upon this club on the street called "Revolutions". It looked really sketchy, and we thought it was like, a gay bay or an underground fight club, but it was actually a bowling alley with an arcade and the bar.

-Arcanon has wrong opinions about the best Amiibo

-Adult Job For Grown Up Money needs to be a game. Also, Mario: The Lawyer. Seriously, we give you people FREE video game ideas, and not ONE has been made. We all have Grown Up Money, we can put a bounty out there. The bounty will not be a lot, but we still love you.

-What I tried to bring up in the podcast, was that in the game Day of the Tentacle, you can play Maniac Mansion in its entirety.

-Five Nights At Freddy's was done by a pretty hardcore Christian dude. It's cool though that he made the game just for the sake of making a horror game.

-The "Whales" discussion: It's good money, but it's not a sustainable business model. You still need to focus on people to convert into whales or giving new things for them to spend money. However, it's still a gamble, and it's good policy to not bank on one source of income.

Back in the early days when expansion packs were something regular, the company had to make a large investment for a lot of content that had to warrant a new CD-ROM printing, a new box and shelf space on the brick and mortar stores. It took investment and effort. Nowadays, DLC can be delivered in smaller packages and almost immediately without installation, so ANYTHING can be DLC.

But it's a hard balance to strike, because making anything still requires resources, and you can't pay for those resources by throwing a bunch of shit in the player's direction and think, "Someone's going to pay for it!" Put too many pay to win roadblocks in the player's way, and they won't get far. Put too much extra cosmetic stuff in the game, and it might not get played.

Plus, if whales are so smart, THEN WHY DO THEY LIVE IN THE OCEAN?

-The Jack Thompson thing is real though.
Let's sum up the arguments being made:
Anita Sarkeesian- Hey, video games can use these things that reinforce tired gender bullshit less often.
Jack Thompson- Ban this video game because banning shit is all I know how to do.

-Gravity Falls is a fantastic series.

Soos and the Real Girl was a pretty good episode, despite coming out around the same times as Five Night's at Freddys.

-When Paolo mentioned "HATE. HATE." I was thinking of "I Have No Mouth And I Must Scream" with AM's Pillar Of Hate.


-When Jeff mentioned Andrew Huang's song's "Water", I thought of the song "Drop" by COrnelius which is along the same lines:

Email ThisBlogThis!Share to TwitterShare to FacebookShare to Pinterest
Labels: echo chamber, feminism, five nights and freddys, gravity falls, i have no mouth and i must scream, Jack Thompson, podcast, post game, recap, water

Let's pretend that I wrote this on Sunday so I don't have to address the absolute MOUNTAIN of bullshit that happened on Monday, and that is currently underway. I'm reblogging all kinds of relevant shit on my Tumblr, so if you're looking for that, PLENTY to keep you occupied.

OK CHIBI-PA, YAY!!! First time going, and glad that it was another SoFlo con, since it only took me an hour to get home. Overall, I'd say it was very well done, if the reg lines were a little long.

-Brought the house down with a turn on "American Idiot" on the Karaoke machine. The crowd was HYPED.

-"Force Of Dragons" was a hit, BUT a bit too long, and my crowds aren't mosh-worthy yet.

-Goldeneye 007 for $13? HELL YEAH! I'm probably going to stream it, like all the other things I promised I'd stream. Totally you guys.

-Managed to run into someone I played Magic with one time at Wizard's Tower in Stuart, and get a few games in.  Also tried out a new TCG called Conjure. It's not as pick up and play as Magic, but it was an interesting experience.

-Deb, who was one of the liasons, was REALLY NICE and made sure everything went well. She also told me a story of that one time she saw Nine Inch Nails open up for Iggy Pop.

-S.S. Hanami were solid dudes as usual, and Andrew, the drummer did a rendition of "Pass The Class" with me! I have thought about getting a backup band to help me out at certain cons...

-I got ZifProd to record video! Again, expect that when the time comes.

ALBUM TIME! I've offically sent in my first track to be mixed and mastered. THe artwork is under way, and I'm currently focusing on building a buffer so that my last couple tracks can be recorded without a hassle, so for the next few months, it's all hard wok for me.

I'll be playing for about an hour, so check me out! I'll also be checking out Con-rades S.S. Hanami, who will be playing on Saturday, and anything involving Magic: The Gathering :D. If you're down to sling some spells, I'll have Modern, Standard AND Commander decks on me.

I don't have a table, but I'll be holding guerrilla concerts Friday and Saturday in the halls, selling merch and being a cool dude.

Now, as I mentioned last week, WHEELS ARE IN MOTION, and here's a sneak peek: 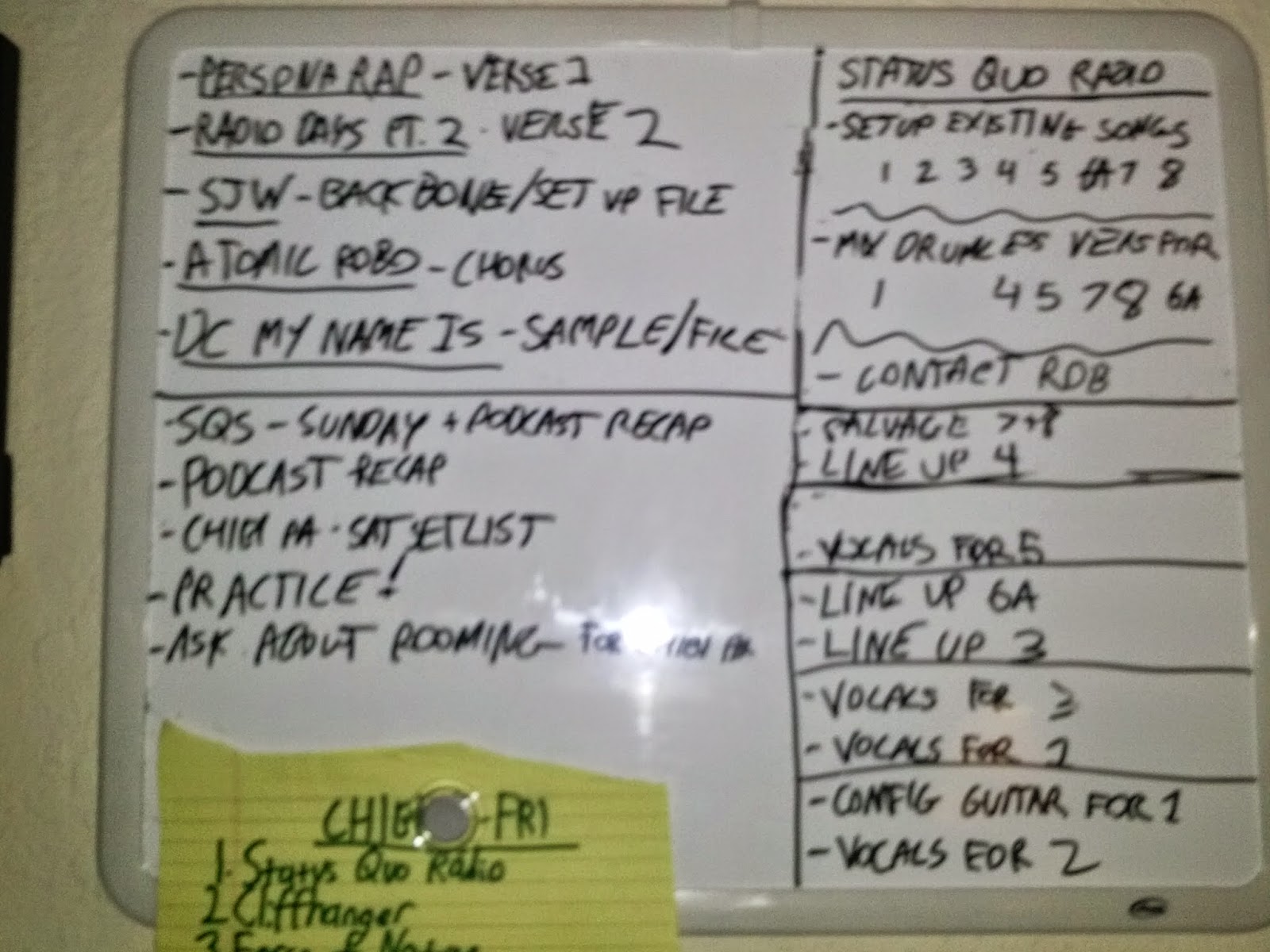 Yeah, I GOT A WHITEBOARD. It's good to look at and see, "Well, I've only got about 30 minutes, I guess I can do this..." Smaller, more achievable goals make everything easier and less stressful.

On the left, is a bunch of song concepts I'm working on and a general TO DO list, and on the right is the central nervous system for Status Quo Radio as it stands. A lot of rerecording old stuff, writing new stuff and just organization is on the docket, so we'll see where I stand in a few weeks.

For some big, BIG updates, talk to me at UltraCon, and tune in for the State Of The Bastard Address on January 11th, 2015.


Chibi Pa- I've got 2 shows, Friday at 8 PM and Saturday at 6 PM.I'm working on the set lists RIGHT NOW. And I'll be practicing THIS WEEK. No word on what room I'll be playing just yet, so keep an eye out on Facebook and Twitter.

Also showing up will be Con Bros S.S. Hanami
I'm starting to get more and more hype about this convention. Guests I haven't heard of, but usually the smaller cons have a TON of neat events, and are attended by some cool people. Hopefully some of you show up.


LIKE, U GUYS. I NEED A WHITEBOARD AND FOLDERS AND SHIT FOR THIS.

OK ON TO OTHER STUFF NOW

-Heroic in Standard? CALLED IT!

-This music video? Makes me want to bring back Video Of The Week.

NEW SONG: the title is really long you guys


OK, so I found a flyer on the floor about three years ago in Times Square, that for some reason said "Homeless Holocaust" in the back. I came up with the song in about 5 minutes, pretty drunk later that night in a Manhattan hotel room, when I rediscovered the flyer in my pocket.

Status Quo Radio updates? Progress is being made, but it's slow and steady, but I'm working on new music all over the place, trying to make up for lost time.
Posted by Rhythm Bastard on 11/03/2014 No comments: