JAM OF THE WEEK: "Party Like It's Your Birthday" by The Studio Killers

Studio Killers, Mystery Skulls and Goldfish are the the holy trinity of "dance music I love and they also have kick ass animated music videos".

While most of the internet was (rightfully) gushing about The Gorillaz's "Humility", this what was kicking on my stereo. Like The Gorillaz, the Studio Killers are a "virtual group" that is a "side project" of another band (Damon Albarn from Blur, Teemu Brunilla from The Crash).

Studio Killers are really good "night driving music", especially if you're dressed like you're straight out of Miami Vice and wearing shutter shades: It's energetic without being too intense, and full of soothing synths. I've sung the praises of their first single "Ode To The Bouncer" before, and "Jenny" is a solid recommendation, so it's welcome "Party Like It's Your Birthday" continues the tradition of excellent summer jams.

One thing I'd like to bring attention to is that The Studio Killers are 2D now. Not a complaint, I just found it intreresting, considering the 3D models from "Bouncer" and "Eros and Apollo" weren't bad or anything. But new album, new look. By making everything more angular, it feels less dreamlike. The "magic" is lost, but the music is still great, and if they flesh out the "world" of this new look, I'm still 1000% on board. Email ThisBlogThis!Share to TwitterShare to FacebookShare to Pinterest
Labels: jam of the week, studio killers

What Is Sunday REALLY?


Whew, this took a while! Inspired by the Magic The Gathering Set, Dominaria!
Yes, this did take a while, because I put so much into it. So, let me break it down:
1. Real Life
PAX East was in April, and right after I started a very physically demanding job, so I wasn't exactly eager to start working on music when I got home, expecially one with as many stumbling blocks as this one.

2. The Tune
I wanted something epic, yet poppy, like The Killers or Bastille. The difference with those guys is that they're full time musicians, or have a band, or work with producers.

I have none of those.

Also, I'm not familiar with the piano, but I managed to get some good licks in there!

3. The Lyrics
The main thrust of this new Dominaria Set is "Legendary Creatures Matter", so Legends was a theme to write around.

The song itself was partly inspired by David Bowie's death in 2016.

After his death, while I did become sad that he's gone, I had an epiphany, as arrogant as it sounds: "Now's My Chance". If not me, then someone else is out there creating awesome things that we just haven't discovered yet. If we keep looking back to the past, then we're just going to get stuck in this cycle of feeling bummed after our heroes die. That shit isn't consistent at all, so it's up to us to be our own heroes.

SCHEDULE CHANGE
OK, so 3000 Brigade Stuff is starting up again, and I can't always think of 3 things to put up on Sunday, especially during slow months. So I'll just put things up whenever! I'll try to do a Jam of the Week per week, because I can write a paragraph or two about a song,

Whatever, my site, my rules, so I'll try this for now.


WOW there was a lot more busy work than I remember.

JAM OF THE WEEK: "Get Up" by Unwritten Law

OK, so after Quantic Dream's first game, Omnikron: The Nomad Soul, came Indigo Prophecy, known as Fahrenheit everywhere else. Omnikron was a game that tried to do so much, with a soundtrack from David Bowie.

On the other hand, Indigo Prophecy was a more limited experience, focusing more on narrative, It also included a licensed soundtrack featuring lots of 70s funk and R&B.... and the music of Theory of a Deadman. So, they tried to make this game more "hip" by including them, and setting the trailer to "Get Up" by Unwritten Law.

This made the damn game look like some Matrix shit, without the aforementioned busywork.

BUT WHAT ABOUT THE SONG? YOU ASK. I was 17 when I first heard it, so I was in the right place to think it was WAY PAST COOL.

Now? On a closer listen, it does a lot of things I like: the bass leading the riff in the intro, how guitars drop out during the verse, the spacious bridge leading to the chaos of the solo, the bass work in the final chorus, the guitar going from standard Deep Nu-Metal chug, to high aprpegios in the chorus. Lots going on, that I wouldn't have paid attention to if I didn't have to give these things a close listen.

This would have been perfect in another game I loved around the same time: SSX 3. Everything about "Get Up" feels like it's "jumping off" to the next part of the song. And it's nu metally. I was a teenager in the early 2000s, so sue me.
Posted by Rhythm Bastard on 6/19/2018 No comments: 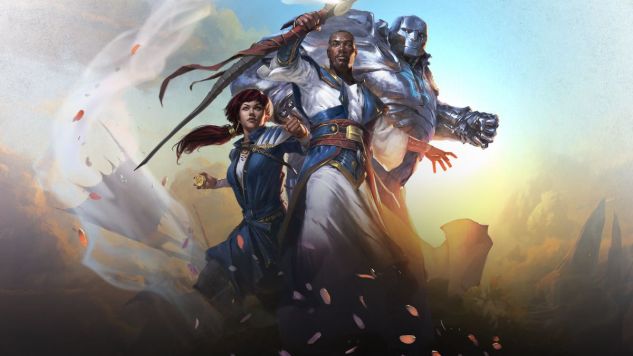 My new song, inspired by the Dominaria set for Magic The Gathering!

This one took a while because I got REALLY ambitious with it, and haven't been playing Magic as much as I have, but I'm please with the end result.

The set was all about Legendary creatures, and with so many in the set, I had to incorporate legends into the theme. Also, the set is a return to the previous "center" of the Magic Multiverse, Dominaria, so legendary planeswalkers like Teferi, Karn and Jaya Ballard make a comeback. But, it's mostly to set up the current generation of Planeswalkers (Gideon, Jace, Liliana, et al) and their story going froward.

Also, this song is about David Bowie.


OK, so TheHashtagonist on Twitter, a writer and podcaster, made a parody version of Mambo No. 5 about E3, and I became REALLY TEMPTED. So I got home, got a free karaoke track, and got to work. All I really had to do was change some words around to fit better, and BOOM, you get this mess!

JAM OF THE WEEK: "Dancing In The Dark" by Bruce Springsteen


OK, So I know this isn't regarded as the BEST Springsteen song, but I have been thinking about it a lot lately, primary because it's so different. The pacing is upbeat, Bruce begs more than sings, and the song is about that unique kind of depression where you're stuck in a rut and have nothing to do.

However, that specific synth sound, is so calming. It's still the main hook, but the edges are rounded enough that it acts like a sedative. Like, the synths in Toto's "Africa"- Wait.

I mentioned Africa on the internet....