I know, I know, but familial and girlfriendial obligations keep me from finishing things up.

My pick? Well, I'm pretty indecisive, so I'll pick from the losers of the poll from this bunch.

"Joker and the Thief" by Wolfmother- This song's in Rock Revolution, but while that game has an awesome setlist, it might be too small time to cover. Still, there's a great opening, and catchy verse, and it sounds a lot easier than it's labeled, so please allow me to chill some?

"Billion Dollar Babies" by Alice Cooper- I don't know how this version somehow differs from the version in GH2, but I'm really digging it.

"Screaming For Vengence" by Judas Preist- My thought process: "Wow! This song seems awesome. It'll take some work, but it's pretty good" "OUCH THAT SOLO IS RAPE!!!"

"Snow (Hey Oh)" by Red Hot Chili Peppers- Time to bust the myth that this song is actually easier on a real guitar.

Still working on that foreshadowed update, but just so I have SOMETHING, I'll give my opinion on Green Day's latest album, 21st Century Breakdown.

Like American Idiot before it, 21st is a concept album, with some kind of story. I really couldn't tell. The names Christian and Gloria show up repeatedly, but the story's very loose and separating it into 3 acts only adds to the confusion.

In other words: THE LYRICS MAKE NO FUCKING SENSE.

It's supposed to be about the post-Bush days, and given that Armstrong's not rallying against him this album threw his focus off, but there's some really weird shit in there. I'll leave it to Something Awful for some examples.

Having said that, it still kicks ass.

When you first pop it in, and hear stuff like "Song Of The Century" and "21st Century Breakdown", it seems like they've gone to the poppy side. However, when thumpers like "Know Your Enemy" and "Christian's Inferno" come about, they're still the same, they just threw some other stuff in for the sake of diversity. And it is diverse. The seventh track (whose name escapes me) is reminiscent of a Beatles tune, and "21 Guns" reminded me of a Weezer ballad.

It feels so well put together, nonsensical lyrics be damned!

And this, like THe Hold Steady's "Stay Positive", knows when I'm bored. Half the songs start out slow, then kick into high gear the first minute in (like Viva La Gloria! and Before the Lobotomy)

FINAL VERDICT: Get for the catchy and diverse tunes. If you like rock, there's at least one song you'll like. For example, me and my Dad can't stop listening to "Static Age", even though I need someone to explain it me.

I do have faith in their selection of singles, since they, like American Idiot, seem to either be completely self-contained, or have themes that overshadow the story in the song.
Posted by Rhythm Bastard on 5/28/2009 No comments: 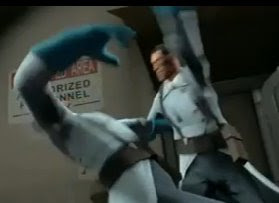 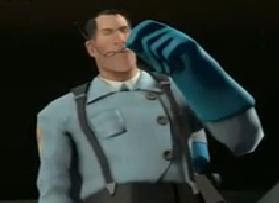 Just got a taste of his own medicine... I HAVE ACHIEVED MANLINESS!!!

And so the Rhythm Bastard Update Begins!

DAY 1- Atop The Fourth Wall

I mentioned this guy on Sunday, but today he has a new video out (every Monday/Tuesday), New Guardians #2.

OK, just kidding, I FINISHED IT AND YOU CAN NOW DOWNLOAD THE SONG!!!

LYRICS:
He is a man who takes pride
in the comics that he keeps,
But have you seen this crap
that he checks out every week?
In the future Superman fights
Adolf Hitler's clones.
90's kid buys Issue #0
and thinks Liefeld owns.
Amazons attack and those doctors
build up Neutro
Then it's take over by
President Insano.
Now sit down, 'cause
he'll tell ya which comics are the worst
Yeah, Atop The Fourth Wall
Unless Deadpool breaks it first

P.S. If anyone can reccommend a better site for uploading music, and can tell me how to stream it, that'd be great...
Posted by Rhythm Bastard on 5/26/2009 No comments:

Ever since I read and watched Watchmen, I've started to get a bit more into comics, particularly everything Deadpool, and Transmetropolitian.

One contributing factor to all this is Linkara of Atop The Fourth Wall which is also on That Guy With The Glasses.

He reviews old comics that are particularly stupid and everything Liefeldian. He's currently looking for a new theme song, and I'M GONNA GIVE IT TO HIM. I'm finishing it up right now, and will have it on by tomorrow or Tuesday.

Also in the coming days, some more updates for really awesome things. Namely other songs on Tier 5, 2 more songs I've written, as well as a couple other site updates. So, in the vein of the recent updates, consider this, THE RHYTHM BASTARD UPDATE.

WHEN WILL IT START?
HOW LONG WILL IT BE?
WHOOOO KNOOOOWS?
Posted by Rhythm Bastard on 5/24/2009 No comments:

Yesterday, I told you about "Sympathy For The Devil" being on the next Guitar Hero.

Then, I find this has been leaked onto the internet:

Then, I get this news that Green Day might be coming to Rock Band.

Shit, Minority, Brain Stew, and HOLIDAY? THE FIRST SONG I EVER LEARNED ON GUITAR?

BONUS LESSONS ARE IN ORDER!!!

Finals time is all up ons us, so no time for loafing.
Posted by Rhythm Bastard on 5/17/2009 No comments:

So, USA Today and Joystiq have released news about the new GH game coming later this year.

-Wait, anyone can play any instrument, even 4 lead guitars? That's kinda cool...

-Any songs announced?
The Rolling Stones – "Sympathy for the Devil"
Bob Dylan – "All Along The Watchtower"

AHHHHHHHHHH!!!!! OMG SYMPATHY FOR THE DEVIL AND WATCHTOWER HOLY HELL THANK YOU JEEBUS!!!!
If they can get Rush's "Spirit Of The Radio" then I'm sold!

Wait, what's this from the USA today article?

"Guitar Hero 5’s songlist has a fresh feel, with one-fourth of the music having come out in the last 18 months and more than half from this decade"


Yet another song much easier than the tier implies. It's fast though (from here):

If you can alt strum, the solo is easy, especially if you use the arrangement in the tab I linked. That way, your fingers never have to move up and down the neck. Or is it left to right...
Posted by Rhythm Bastard on 5/12/2009 No comments:

Song updates are rare these days, finals time and all.

Now for "Why Activision Will Make Me Either Rich Or Disgusted":
1. Guitar Hero: Van Halen "Hot For Teacher" was already blown on GH:World Tour, so the only song I'm looking forward to are "You Really Got Me". BUT, according to the article, the guest acts include Queen, Weezer, Blink 182, The Offspring and Queens Of THe Stone Age. Sounds pretty good, but damn it, why not just do DLC?

2. GH5, Band Hero and DJ Hero Not much for DJ hero, but you have the 5th Guitar Hero game in as many years (fine, keeping up brand recognition you consumer whores), and Band Hero, a "family-friendly" game, like Lego Rock Band. Really? I understand the need to compete, but all this "family-friendly" BS is making me nauseous. WHY NOT DLC? Seriously, I thought these games were supposed be getting kids away from poppy crap, not reinforcing it.

3. Guitar Hero: Smash Hits Some pretty good ones in there. "Take Me Out", "Smoke On The Water" and "Godzilla" from GH1, "Freebird", "Beast and the Harlot" and "Trippin' On A Hole" from GH2, and the GH3 songs are more focused on the easier songs (save for "Raining Blood" and "That Damn Song From That Band Whose Songs All SOund Like A Robot Made Them That Every Spergs Out Over"). "Back In The Saddle"'s an odd choice, but seriously, how many rhythm games are going to feature "Round and Round"? Are there no other Ratt songs?
Posted by Rhythm Bastard on 5/07/2009 No comments:

Some People Do It Anyway

I think about weird things sometimes, like "What would it be like RIGHT NOW if Ron Paul were President?" (Worse off then we are now, but maybe be a bit more stable after the recession) or, "What would happen if someone were to go back in time and kill Hitler?" (Probably this). However, for the sake of intelligent discussion, let's speculate on "What would Kurt Cobain be doing today if he didn't kill himself?" My guess, READING MY BLOG!


It was just fast, and hard to keep up.

SETLIST UPDATED
Posted by Rhythm Bastard on 5/02/2009 No comments: