I listened to it at work this morning, and lo and behold, I hear "Axe Cop" on Rag-Nerd-Rok Episode 21.

I really hope they play more music on future Eps! This is going to be rad!
Posted by Rhythm Bastard on 4/24/2012 No comments:

So, my local shop turns out, only sells used vinyls, but I managed to score Cheap Trick at Budokan, A Night At The Opera and Cool For Cats for 2bux apiece, along with Oasis's "What's The Story Morning Glory?" on CD.

I was thinking, at I-Con, I was selling/giving away CDs with this cover: 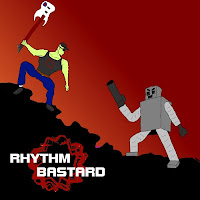 My question to you all is this:
Would you be interested in a CD with 4/5 songs of your choosing, AND a copy of the album in 11x17 poster format?
Posted by Rhythm Bastard on 4/21/2012 No comments:

LIVE VIDEO OF THE WEEK: "Pinball Wizard (and a fair bit of Tommy)" by The Who performed by Tenacouis D at GuitarCenter's Drum-Off 2011

Tenacious D paying tribute to a band they obviously love. Jack Black and Kyle Gass are better singers and guitarists than they get credit for.

MUSIC VIDEO OF THE WEEK: "I Was A Teenage Anarchist" by Against Me!

Like with last week's "Apartment", I love a good mystery in my video, and it drives the point home: "What did that kid do?" Apparently something so horrible, that cops (who are always in the right of course) chase him down and beat him, while the crowd, save for one person, look on.

The video is supposedly all in one take, and I'll buy that. There's no points where you can make a quick cut like OK Go's "This Too Shall Pass". For a song about teenage naivete and maturing into a larger scope of the world, the long take works, as I think it encompasses the aftermath of the protagonist in his one glorious moment after discovering a thing called "anarchy".

Seriously, though? Those cops and that crowd suck.

This. This is what I love about doing what I do. What really sealed the deal was the guitarist in the Aquabats rashguard. This wasn't a random song, this shit was INTENTIONAL.

Natural Failure, thank you.
Posted by Rhythm Bastard on 4/18/2012 No comments:

Email ThisBlogThis!Share to TwitterShare to FacebookShare to Pinterest
Labels: against me, mc lars, police, tenacious d, the who, video of the week

In my travels, I saw an old article I wrote in response to a blog post hailing the Top 40.

Two questions came out at me:
1. How come I don't write long ass blogposts like that anymore?
2. Has my attitude changed since then?

Then the answers:
1. Because suckjob I hate lots.
2. While it hasn't changed, it has softened a little. I regularly repost Todd In The Shadows, kick some DJ Earworm, and since I'm no longer required to put up with it in a gym-type setting, some of these songs can actually catch on for me. Yes, the very nature of the format means plenty of shit gets overplayed, but I'm in control. "Rolling In The Deep", "Party Rock Anthem", and "Pumped Up Kicks" are just a couple of the songs I've grown to love that happened to be played on Z100 (a NY Top 40 station)

However, the point of my rebuttal remains: just because it's on the Top 40 doesn't mean it's the best. Good stuff gets ignored all of the time, one-hit wonders are as frequent as ever, and there's still shit out there, so Top 40 doesn't quite have the success rate the author of the original blog post implies.
Posted by Rhythm Bastard on 4/17/2012 No comments:

HEY! HEY!! I've got a reason to plug myself again!!

LIVE VIDEO OF THE WEEK: "Axe Punk/Axe Cop: The Song" by Rhythm Bastard at I-Con 31

I ROCK OUT TOO HARD!!! This is the other live video I have from I-Con and Xenu damn it this was fun to play with just my friends there.

But some asshole calls me "Eric", which is certainly not my real name.

MUSIC VIDEO OF THE WEEK: "Apartment" by Young The Giant

Hey, remember these guys? Young The Giant?
I saw this music video the other day on MTVU, and my first thought was, "Oh! I'm watching a channel called MTV and there's music on it!"

Then I thought, "Oh! This is the band that covered 'Ignition (Remix)'!"

It's not really my thing, but it was nice video. At first the whole "Wacky Hipsters Having Crazy Spontaneous Fun! (TM)" was going to get me to close the browser, but occasionally it cut to the lead singer lying in the middle of nowhere, and that little mystery was enough to keep me watching.

I'm still on the fence about giving them money, since it might be some good chill music.
Posted by Rhythm Bastard on 4/12/2012 No comments:

Email ThisBlogThis!Share to TwitterShare to FacebookShare to Pinterest
Labels: axe cop, i-con 31, video of the week, young the giant

Yesterday was for Dino Hunter MD, today it's everyone else.

#1- Herobes
Herobes are what the name implies: Superhero and geekery themed robes. Their set up was a nice little picnic table with some Dunkin' Donuts Muchkins and coffee. I sat down, put on the Batman robe they had, and oh shit was this comfortable. Alex, the salesman present, was pitching to me the whole time, but the robes were worth it. The $60 price tag is a little much for me, but if I got paid before I-Con I would defintely consider it.

MAYBE A SPONSOR ON THE BUNKER?

#2- GeekBoyPress
This guy was right across the table from us, and had a lot of prints on sale. I picked up a Psych one for the family back at home (they got me into that show). Hes a cool guy.

#3- Marc Gunn
Picked up his latest album, "Don't Go Drinking With Hobbits". I made an effort to only pick up stuff from indepentent artists and vendors, and this he seemed like a "big deal", I figured I'd pick up one of his album. Played a song or two on The Bunker, and I gotta say, I'm digging it.

#4- Rag-Nerd-Rok Podcast
My job sucks, and leaves me with long periods where I'm staring at the clock, slowly pecking away at the keyboard. Usually I'll have the Mega64 or WTFPod to listen to, and these guys have officially joined the rotation. There's a couple different segments on the show, discussion, mad libs, etc. that keep it interesting.
Posted by Rhythm Bastard on 4/05/2012 No comments:

Email ThisBlogThis!Share to TwitterShare to FacebookShare to Pinterest
Labels: i-con 31

Rock Band Blitz: The Frequency/Amplitude Update We've Been Waiting For

AND it automatically updates with all of your Rock Band DLC!
Posted by Rhythm Bastard on 4/04/2012 No comments:

The other Big Thing for me this weekend was the screening on a webseries my friends worked on, Dino Hunter MD. Like my concert, it was a mostly friends-only affair, but it was fun to have everyone in there. I hung out at the table for a little while, gave away some free CDs, and paraded around with a robot! 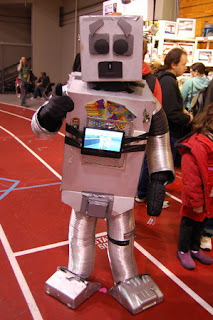 David Ginn, one of the creators of the show was selling his books at the table, and I bought a copy. I should have bought a hundred copies because he let me crash at his place that weekend. So really, the best I can do now is GO BUY HIS SHIT! His book will be read somewhere in between The Importance Of Being Earnest, The Iceman Cometh, and the latter half of The Complete Sherlocke Holmes.

Also, with every purchase of the Dino Hunter M.D. DVD, you got some stickers, and a free copy of...


Now available for your supple ears, all my Dino Hunter M.D. songs! I'll see it's cool to post the rest of the tracks here, but YAY!!

I've never had so much fun at a gig before!

There's going to be more of these, but fuck it, I'm tired.

The room was small, but I got a decent echo. I was even able to hook up my laptop to the PA system.

I opened with "Status Quo Radio" and "Cliffhanger", and it was great seeing people outside the door bob their heads.After I got a decent crowd, and they were into it.


Then I lost them sometime around the TGRK cover.The rest of the concert went great. Those who stayed loved every minute of it.

I still have lots more to write about I-Con, but that's it for now. If you got a CD and looked me up, thanks!
Posted by Rhythm Bastard on 4/02/2012 No comments: