I'm not going to be doing a new one VERY soon, as I have Anime Iwai to worry about, so you'll have plenty of time.

NEXT week, the rest of you will be able to stream the new track. It's worth it, I promise, and I will have something special to go with it by then. Honestly, I'm just glad that so many people have shown their support so far.

Regardless, I will be playing this new song at Anime Iwai!

Can you believe Season 2?

ok this was just a ploy to get eyeballs on my site. Stranger Things I'm sure is great, but you know. I'd need Netflix.

Since the schedule was released the other day, I'm going to clue you in to all the good panels worth attending:
Hardcore Nerdcore Punk Rock Featuring Rhythm Bastard
Saturday, November 11th
3:00 PM- 4:00 PM
Panel Room 2
MY CONCERT! Again, working on the setlist for this one is fun, since I can throw in SO MANY more new songs, and I'm working on having a new piece of merch ready by then.

3000 Brigade Presents: Mushroom High Rules!
Saturday, November 11th
Doors Open at 8:00 PM
Main Events
OR Fast Times At Mushroom High
The 3000 Brigade is the largest active cosplay performance troupe in the country! They are proud and excited to bring their next performance to anime Iwai. It is a comedy variety show with amazing costumes, wild sexy dancing, stage combat, and many of your favorite beloved characters acting very inappropriately. This year marks a decade of 3KB shows. Please come celebrate with us!

I just copied what they wrote on the Facebook Event Page, because this is already 2 days late and I want to get to Bubsy: The Woolies Strike Back.

Iwaivor Series
Saturday, November 12th
3:00 PM-4:00 PM
Panel Room 2
A Tag Team Throwdown where you and a partner can pummel your way through the competition to win the Championship Belt! There will be thrills, chills, spills, and maybe one of the commenters will wear a silly costume!

I'm trying to differentiate the various Fake Wrestling Events I do. So, this one is a Tag Team Event. Again, participation MAY switch things up a bit.

What I hope to accomplish here is that:
AFO Rumble is the Royal Rumble type fight,
Mizu-Mania is a standard tournament
Iwaivor Series is a Tag based event
Holmat Slam WOULD be the Summer Slam, but it could also be the Hood Slam/ECW of games.


JAM OF THE WEEK: "Die, Die My Darling" by The Misfits

It's Halloween and I wanted a spooky song. Fun fact: First I ever heard about The Misfits was from the Musical Issue of Deadpool. It sucked and it was written by Daniel Way, which explains that.

I'm also CERTAINLY NOT working on a live cover version that uses clips of Reaper from the game Overwatch.
Posted by Rhythm Bastard on 10/31/2017 No comments:

PATREON IS STILL GOING ON!

I just posted an update to all of my Patrons about some cool stuff I got planned, and will be releasing the first Patreon song THIS WEEK!

CON NEWS! IWAI AND HOLMAT CONFIRMED!
I just confirmed with Holiday Matsuri that I will be playing a show AND hosting another very special event!

Combine this with my upcoming show at Anime Iwai AND being a part of the 3000 Brigade Show, the next couple of months are going to be VERY busy for me!

I will post my Anime Iwai schedule next week when I have a better idea of what time all the other stuff is, but the one thing I do know for sure is the 3000 Brigade show will be at 8 PM on Saturday night!

JAM OF THE WEEK: "Don't Let's Start" by They Might Be Giants

I know nothing about The Adventure Zone other than the fact that the McElroy brothers do it, and what I saw in this. I chose this particular video since it was actually cleaner than the "official" versions.

"Don't Let's Start", like many other songs by They Might Be Giants, doesn't scan very well on a focused listen, relying on little lyrical gut punches as opposed to a cohesive whole. When they appeared on A.V. Undercover to cover "Tubthumping" by Chumbawumba, they said that Tubthumping was most like a They Might Be Giants song, because it is composed of smaller episodes, and that really helped put this song into perspective: It's just meant to be a catalog of small, dark moments that apparently mean nothing, and according to the band were made up to compliment the melody.

Orlando Nerd Fest is (kinda) back! Fantoku is a two day nerd music extravaganza with lots of DJs and musical performances and awesome vendors in probably the nerdcore epicenter: The Geek Easy!

I'm looking forward to it, and AT LEAST going Saturday, since on Sunday I've got 3000 Brigade Rehersals, and it's literally the next weekend.
Posted by Rhythm Bastard on 10/22/2017 No comments:


MY PATREON IS LIVE! 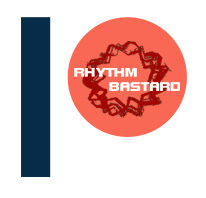 Yes, I finally made the jump into Patreon. I was waffling on it for a while, but I'm taking that step forward. Having a Patreon would help me be able to do more inbetween shows and releases, and motivate to keep working toward whatever that next step may be.

Even if you can't become a Patron, I always appreciate all of you who give me a like on Facebook or Twitter, or come out to my con shows. That's evergreen :)

"FIND THE IMMORTAL SUN" CAME OUT!


Oh yeah, THAT big thing that came out last week. Ixalan takes place on a plane with pirates, so I made the most pirate-y punk song I can think of, taking inspiration from Pirate Metal and Celtic Punk. The accoridion was a VST programmed by me, and Tsukino and Stanpai helped out on vocals. I would have liked to have more people joining in, but hopefully the awesomeness of this one is good enough.

Honestly, I feel like I've been hitting a real hot streak with my MtG songs lately. I just feel like the songs are coming out better, as I've learned more about production.


Yeah, the OTHER big thing that came out last week. Team Fortress 2 is 10 years old, and that means that Status Quo Radio is 2 years old. I put a lot of work into that album, and I'm of two minds about it: Part of me wants to do more in that setting, maybe a comic like My Chemical Romance's "Danger Days", or a movie like The Who's "Quadrophenia", while another part of me wants to move on and put together Album Number 3.

Status Quo Radio was and is a big milestone for me, and I feel bad that it didn't garner at least a little bit more attention. It was an ambitious project, and I saw it through to the end.

Also, SO MANY THANKS to DJ Roborob for his mixing and mastering and production gewdness!

Would I do a similar thing with Overwatch? Thematically, a sequel MIGHT work. However, what made me to SQR in the first place was how different the 9 different classes in Team Fortress 2 felt and played. There's too much overlap between Overwatch's characters, and Blizzard is always adding more, so it wouldn't be as concrete. I love the game (see "Fire In The Hole"), but it might be a thing like my Magic The Gathering songs where it's constantly rolling forward.


JAM OF THE WEEK:"Rush" by Big Audio Dynamite

Big Audio Dynamite was a band that Mick Jones, former guitarist of The Clash formed in the late 80's. This is one of their bigger songs, and it feels like if The Clash went even more Pop after the success of "Should I Stay Or Should I Go" ala Green Day.

I've liked the song since I was a kid, but OH MY GOD IS THIS VIDEO AWKWARD TO LOOK AT. It has all the hallmarks of a cheap 90's music video: Bad sync, shots of people outside at the beach, washed out slow mo, and MICK JONES GIVE BLOSSOM BACK HER HAT.

As part of the stream and the Patreon. Yeah, lot of stuff for this week.

Wake Me Up Before You Status Quo Quo

The 10th Anniversary For Team Fortress 2 is coming up soon, which means it will be the second anniversary for Status Quo Radio. Most likely I'm probably going to do a listening party/concert, but I'll keep you all posted on the details.
JAM OF THE WEEK: "Wake Me Up When September Ends" by Green Day

His name is Billie Joe Armstrong you fucking ingrates.


(Hopefully) it's October 1st when this gets out, but I've been seeing a lot of "WHUP! WE BETTER WAKE THAT GREEN DAY GUY UP" 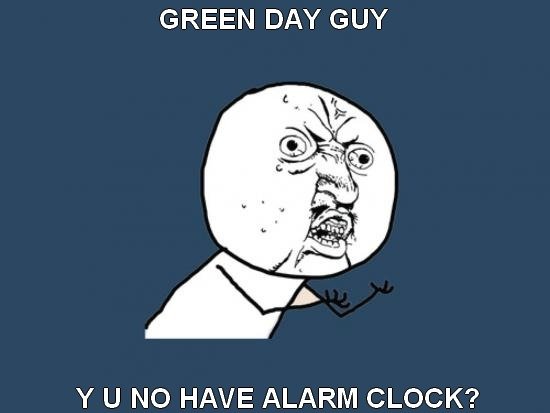 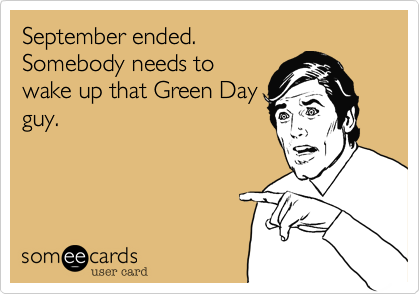 I also say "And Also With You" on May The Fourth Be With You.

The song still gives me goosebumps every time. It was originally written about the death of Billie Joe Armstrong's father, as he died when BJA was only 10. Every time I hear it, I can't help but think of my own Dad, who got into Green Day around the time of 21st Century Breakdown and we went to both Madison Square Garden shows on that first tour. We also went both the Broadway showing of American Idiot, and the touring production when it came down here to Fort Lauderdale. So yeah, Green Day occupies a special place.

Despite all that, there's still  some problems. The music video sucks. The track doesn't fit in with the story of "American Idiot", although tonally it makes sense where it's placed on the album. The endless-

OK, this one is kinda neat.