*blows dust off this place* 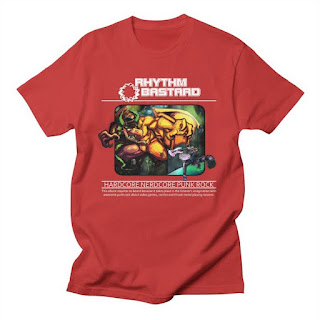 Featuring the INCREDIBLE cover art by Hellbreakfast, this shirt comes in red and black, and all kinds of fabrics.

Next up, Kick Drum Vans! 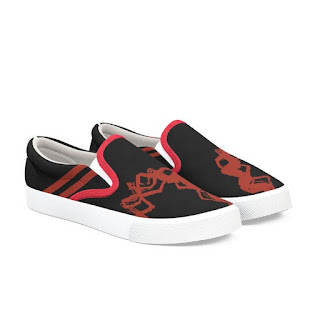 You can see ALL of the segments on Youtube, save for the concert and the freeplay stuff at the end. Like I said at the outset, even though I didn't raise much, it still was a fun day! It was a chance to reconnect with people I haven't spoken to in a while, and I got to dip my toe into games I either haven't played in a while, or have always wanted to try

This ran A LOT smoother than the last Bastardthon I ran, since I now know what I'm doing, and I figured out a pretty good flow to how to run things.

What I'd do for next time?
-LONGER SEGMENTS-  Even when segments were feeling long in the tooth, some of the stuff we wanted to do was cut off RIGHT THERE, and it was like "OH, OK NEXT ONE!" Maybe an hour and a half slotted out instead of just an hour.
-Test the sound levels for my concert before hand and then MARK EVERYTHING FOR LATER
-Wider green screen. My current Green Screen is just two pieces of green fabric clamped together. Please give me money so I can afford a third.
-More crossover opportunity! I did have someone want to do Left 4 Dead 2, and others can join in, but the weekend I rescheduled it for didn't work out.

Not ALL of these dates are set in stone YET, but I am working on the logistics SO:

Mizucon's an annual mainstay and AFO I've played a few times, and am happy to go back to, but FWA and BLFC are brand new to me! I just hope I can be able to afford them, and at least get some decent buzz going. There's still A LOT to be sorted out, but I just hope I can make it worth the trip!

JAM OF THE... TIME I'M WRITING THIS: "Fancy" by Orville Peck

I've said for a while now that all the good country is being made by weirdos, like Trixie Mattel (drag queen that can put out fun pop-rock jams), Sturgill Simpson (MY ALBUMS AN ANIME, FUCK YOU) and Orville Peck (deep voice, cool mask, all atmosphere) because most of the mainstream stuff is either:
1. Trying to get a commercial crossover hit by being LITERALLY in a commercial
2. Boyfriend Country, which isn't BAD perse, but it's Pop or Adult Alternative but twangy
3. Facebook Grievance Country, aka "I'm a Boomer Dissapoointed in My Country (aka my kids are different entities than I am)

Orville Peck has this bassy voice that is just haunting. Not deep in the way Anthony Fantano would make fun of singers who ape grunge rock, but legitimately otherworldly, and he uses that to great effect in his songs.

"Fancy" is a cover of a Bobbie Gentry song that was made famous by Reba McIntire in the 1990s about a girl who gets sent away to whore herself out to escape poverty. It's a compelling story, which is at the center my favorite country songs, and Orville Peck by just changing one word, ("There stood a woman where a half grown kid had stood", replace kid with "boy") makes it sound more desperate. When it's all backed by a sparse, but well utilized instrumentation adds this gothic layer to it all.