Status Quo Sunday Gets By With A Little Help...

ALL RIGHT, so forward progress is being made in general on everything!

Except my Magic playing. I only went 2-2.

-First and foremost, I've gotten a Flickr page, so you can view all the pictures I took. Right now, only Miami Hurricon is there, but I'll add more as I got back into the archives and dig up some good stuff :)

-Second, progress on another song is coming along and I really like the job the drummer did. So once this song is done, Act 2 will be more or less complete. Hopefully I can finish it in time for Omni Expo. This is really starting to come together, and right now my goal is to finish one "Act" in between each con I'm going to. Act 1 is already (more or less) 100% complete,

After all of that, I'm going to get a Kickstarter set up so that I can get some funding to have it mixed, mastered and printed.


-And, five minutes before I hit "Publish" on this bad boy, Hero Hype Con comes out with their commercial (WHERE I'LL BE PLAYING!!!)


-Finally, at long last, the E.T. Atari Cartridges have been found. I have no idea how to feel right now: Elated, because something we've believed for a long time has finally come true, or upset, because a long held myth has been taken out of the realms of legend an into reality? These are trying time we are living in my friend.
Posted by Rhythm Bastard on 4/27/2014 No comments:

THE ERICH AND ERIC SHOW- EPISODE 1

Two episodes for your listening pleasure, but both are pretty laid back, so this recap will be sparse.

-All Wrestlemania talk has been pretty much covered in my appearance on this Heel Turn podcast. Recap? Not as predictable as I was expecting it to be (aside from the main event), and the streak being beaten has lead us from Paul Heyman turning into Paul Heyman, The Most Glorious Motherfucker In Existence, Whose Client BROCK LESNAR Beat The Streak.

-Whenever someone tells me "Uh, you know wrestling's fake, right?", it's a lot like when Guitar Hero and Rock Band were first getting popular, and people would say, "Uh, you know that's not a real guitar, right?" HOLY FUCK GAMESTOP AND VINCE MCMAHON LIED TO ME?!?!?!?

-Yes, Reborn! is an actual thing. I still haven't read the manga.

-Kill La Kill was an absolute blast to watch, and is a lot better than its premise would entail. Is it deep? Eh, it at least has something else going on behind all the skimpiness on the surface. There's also plenty of nice character moments that will keep you watching until the end.

-Convention talk goes on a lot here. We talk PAX East (which I Missed), QuakeCon (which I would like to visit) and briefly go into Miami Hurricon (which I performed at).

The more of these things I go to, the more I feel like the less densely populated the state, the more cons there are. Back in NY, there was hardly anything smaller than NYCC, but here in Florida, there's always something going on every couple of weeks. Size and success of said cons varies, but outside of college campuses, these are big meetup spots for younger people.

Plus bars can be fucking expensive. Though a couple places nearby have 2-for-1 beers all night. That's pretty sweet. If there's a con that has 2-for-1 beers...

-Where was I? Oh yeah, so my position on Extrasolar has changed considerably. I had a guy do a thing to help me out, but I am able to go out and explore the planet. It reminds me a little bit of this PC game I played when I was younger, Dinosaur Safari. Don't remember much of it, but the Wiki page has "See Also: Pokemon Snap"

-So to combine all of this together in a completely coherent manner, here's animtor 2Snacks's take on Two Best Friends Play Pokemon Snap.

I've mentioned it before, these gigs of legend.

Everything was 100% on point. My setlist, planned out, was rehearsed for weeks in advance. I had sent out plenty of invites on Facebook, and did a ton of advertising in the days leading up to this past Saturday.

One of my neighbors in the vendor's room, Knova, was kind enough to lend me a cameraman (SUP ALEX?) so I can have it all on video. I had a complientary table, I sold some CDs, got a TON of names on the mailing list, and took plenty of pictures of some cosplays for the coming recap video.

On stage, I was perfect: No lyric fumbled, no note missed, and all eyes were on me. This would have been perfect.

If I remembered to bring a fucking mic stand.

We learn the best lessons from the harshest situations.

Anyway, good con, great price (aka none). There was some sponsorship from Florida Supercon, which is why a couple things managed to work, like the sponsorship from Microsoft for the game room and the location for what is a free con put on by a college club (Miami Airport Convention Center).

I just want to give a big shout out to EVERYONE who came out to see me! This put a huge smile on

-I got to see HotDiggedyDemon, whois absolutely gigantic in person. He didn't have any cartoons to show off, but he did make for an entertaining Q & A.

-I got to play Zombies!!! which is a game I only seem to play at cons. Imagine the survival horror aspect of the early Resident Evil games and the "HA HA! YOU'RE SCREWED!" of Uno.

-I got a game of Commander in (I faced against the WORST possible Commander, I run an Oloro lifegain deck, he played Erebos, God Of The Dead, effectively neutering ALL of my shenanigans) BUT I DIGRESS

Status Quo Sunday Gathers ALL The Magic In Miami

THIS SATURDAY: MIAMI HURRICON!!!
It's at the Miami Airport Convention Center. I'll be in Ballroom A at 3:30 PM.

You can stop by my table in the dealer's room, we'll hang out, play Magic and talk about whatever!

Now, what are the three things I'm most excited to check out?
1. Hotdiggedydemon- Been a fan of pretty much everything he's done since first catching him on Newgrounds with "Wacky Game Jokez 4 Kidz!" and judging by his previous panels, they're pretty funny, if not an interesting watch.

2. All The People I Usually See At Florida Based Conventions- Namely, the Bronies of South Florida, Carlos from The Hero Hype Con and Ron from Creator Owned Expo. For a state as spread out and desolate as Florida, this is the closest I've ever been to feeling like I'm part of a scene.

3. The TCGs- Yeah, they got Pokemon and Vanguard, but I got me a Commander Deck that will WRECK SHIT.

SPEAKING OF MAGIC THE GATHERING: While the past week or so was mainly prepping for Miami Hurricon, there was also a Magic The Gathering Pro Tour Qualifer not too far away from me. So, this past Saturday, me and a couple friends took a ride down south to play.

The format was Sealed, where you're given 6 15-card booster packs and have to make a deck out of those. One of my friends got into the Top 8, the other made money by getting into the top 16, and while I didn't win anything, I did pretty well (4-3) with what I had, since I mostly got a bunch of junky rares that were either too expensive/useless, or were in colors that were shallow given the rest of my cards.

In other news, everyone I've sent Act 1 of Status Quo Radio to has enjoyed it, and right now I'm looking to finish it up and have it ready for Kickstarter by July. Mostly it'll be for handling mixing/mastering, and merch production.

See you next week for the Recap!

LISTEN HERE, BROTHER, DUDE, WE GOT SOME BIIIG ANNOUNCEMENT FOR YOU BASTARDMANIACS

TWO NEW CONVENTIONS!!!
OMNI EXPO- OMNI EXPO’s first focus is that of an electronics media tradeshow that brings manufacturers of the worlds latest cutting edge technology to a targeted consumer demographic that wants the best the future has to offer right now. The second focus is to create an umbrella venue for like-minded smaller conventions and trade shows in the area that have a similar consumer base. These conventions and trade shows will encompass all aspects of future technology based media, such as but not limited to science fiction, electronic based gaming, multi-cultural fantasy, and animation.

BASICALLY IT'S A NEW HYPE-ASS CONVENTION IN ORLANDO, FLORIDA!

HERO HYPE CON- A small convention in the heart of Miami showcasing cosplayers, gamers & fans, within the super hero world. So basically, GET HYPED!!!

I had a lot of fun last year, and I know this year will be even better!


More news as it comes.

Also I started watching Kill La Kill. The creators have shows like FLCL and Gurren Laggan on their resume, so you know it's going to be out there. While I've yet to see those series, this is just plain insane.

DOWNLOAD THE ALBUM TO XSV, THE INXS SIDE PROJECT NOW!

-One band that changed its front-man and still managed to be sucessful was AC/DC. Granted, the sound of the band changed up a little bit, from fast/hard blues rock to something a little slower, but it's still good.

-Alice Cooper on the Muppets:


-Alice Cooper on Rock Band 2: The Stars. I need to do a live RiffTrax one of these days. You can watch the episode in question here: 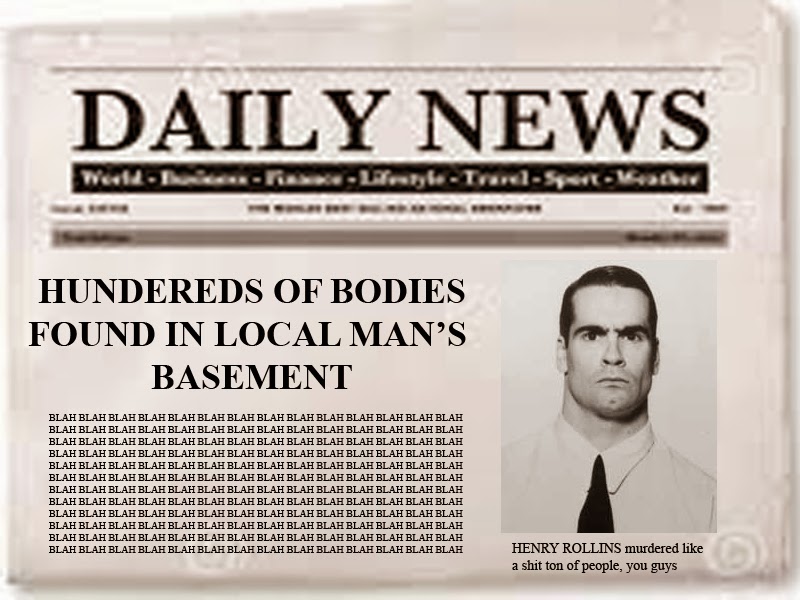 -So here's the comic we were talking about. Henry and Glenn are my OTP.
There's also a Christmas Special:


If you give this to me at ALL (either at a con or send it to me through Amazon) I am obligate to buy you a beer.

-Sidenote on WWE RAW commercials: The WORST thing advertised has to be Chrisley Knows Best.