LIVE VIDEO OF THE WEEK: "Tubthumping" by Chumbawumba covered by They Might Be Giants

But seriously folks, I'm loving the A.V. Club Undercover series. I want to a batch of covers of my own. Someday...

MUSIC VIDEO OF THE WEEK: "Rolling In The Deep" by Adele


Normally I despise Top 40, but this really stood out to me as very intimate song, with a strong, primal beat. Florence and the Machine's "Dog Days Are Over" is similar, but unlike "Rolling", "Dog Days" never really did it for me. I'm not sure why.

I have no fucking clue what's going on in the video, so I won't try to decipher it. There's no real story bring told, but it goes along with the line in the song "But you played it to the beat". The plates cracking on the pane, the rows of water glasses, the drummer, and everything kicking in at just the right time supersede the action itself. What matters is that this all going to the beat.

But seriously, what the fuck is up with the cocaine ninja?
Posted by Rhythm Bastard on 10/26/2011 No comments:

Email ThisBlogThis!Share to TwitterShare to FacebookShare to Pinterest
Labels: adele, they might be giants, video of the week

THE BEST VIDEO OF ALL KINDS EVER: Dino Hunter MD, Episode 2: Attack Of The Robotmen!

Working For The Man...

But I will have a Video Of The Week tomorrow in time for The Bunker.
Posted by Rhythm Bastard on 10/12/2011 No comments:

UPDATE FROM THE BUNKER!

Now back to our regular show:
LIVE VIDEO OF THE WEEK: "Uprising" by Muse at the Fuji Rock Festival

Muse is always a great live band. Thank you Muse for helping a brother out.

"Uprising" is the Muse song for Guitar Hero: Warriors Of Rock. It's really simple, but I think it ties into the game thematically, with the whole RISE AGAINST THE BEAST thing.

MUSIC VIDEO OF THE WEEK: "Red Flag" by Billy Talent


What does the red flag mean anyway? Politically it's been used to signal Socialism or leftist politics in general, which confuses me as an American, since the Right leaning states are known as "Red States".

However, it's also been used to signal danger, and I think that's what the red flag mean in this video. Not starting a "socialist revolution", but warning that if things keep the way there are, we're going to be in some seriously deep shit.

"Like the smallest bee packs a sting,
Like the pawn checkmates a king,
We'll attack at the crack of dawn."

If the pawn were smart he would have bootstrapped his way to be a king.

ON A COMPLETELY UNRELATED NOTE:
Quick call back to last week: continuing my comparisons between Occupy Wall Street and Chanology, I remembered the point at which I said "This just might work!" (for Chanology)

It was the May after it first began, a video in which the head of Scientology in New York told a bunch of protestors "I smell pussy; you in particular" (5:34 in the video)

Now I had the motivation that the people they're protesting are assholes:


Those are police officers leading the group into the middle of the Brooklyn Bridge, where they arrest 700 protestors. Apparently they had "a guy" warn them, but that was for 700 people.

To help them out, J.P. Morgan Chase donated $4.6 million to the NYPD.


Then someone decides to post this on the Chicago Board Of Trade:

Email ThisBlogThis!Share to TwitterShare to FacebookShare to Pinterest
Labels: billy talent, occupy wall street, the hives, video of the week

About two weeks ago, the Occupy Wall Street movement started, with hundreds of protestors in a little tent city standing in front of the financial district. I was extremely cynical regarding it for two reasons:
1. There is absolutely no incentive for Wall Street to give a shit about these people. At the end of the day, no matter how bad a protestor made them feel, they can always go, "WELP I STILL GOT ALL THIS MONEY" then buy a politician to make protesting illegal. You can occupy it, but you can't make it give a damn.

Anonymous can say all it's going to change the world after the success of Chanology (the protest against Scientology), but I think that was lightning in a bottle.
The reason Chanology worked is because there is a period of time after your first encounter with Scientology, whether it be a stress test table, or walk in for their movie, where they can't be sociopaths. All the disconnection (where you have to separate from non believers) and Xenu come in to play a while after that first meeting.

A Wall Street exec can go his whole life without ever looking you in the eye, and still make it so you don't have any money at the end of the day.

2. When the protest actually started, my fears were confirmed that, yes, this was going to be absolutely useless. The audience was mostly college and post college 20 somethings; the same people who show up to EVERY protest.

Then they had to move to Zuccotti Park a few blocks away, on a day when no buisness was taking place.
Then came the Tweet asking for people asking for half vegan, quarter no cheese pizza.
Then came the Ron Paul supporters and BitCoin advocates.
Then came the topless yoga classes and I became curious.

Then I wrote the thing off. The second a camera gets on these people, the word "hipster" is going to be sung from the top of the tower as it fades into obscurity, with a bunch of voices all vying for the last breath.

Then, a week later, this happened:
VIDEO OF THE WEEK #1- Woman Getting Maced By Police Officer


Then they had my sympathy.

The officer's name is Anthony Bologna, or Tony Baloney. Don't accuse him of being an asshole or anything, I bet he got picked on a lot in school, like "Tony Baloney has a tiny penis" or, "Tony Baloney will be a sad old man who will be a cop because he's too dumb to do anything instead of, you know, because he wants to protect and serve" and now he's taking it out on women who only asked what the hell was going on. Oh wait, maybe he is an asshole.

Now it's getting actual, legit support from several different unions, including the Transit Workers Union and the ALF CIO

And now I'm glad that at least someone is there. This is a legit grassroots movement. The reason the Tea Party gets all the attention is because the same people OWS is protesting put a bunch of money to get a bunch of old white people riled up. While I can understand the anger of the old white people, all that cash just gives the TP a bad aftertaste.

So, three things I hope to see going forward:
1. Get more working class, "normal" people in on the protest. It's not a "Save The Whales" thing where it only affects one enthusiastic subset, it's a subject that affects all of us: 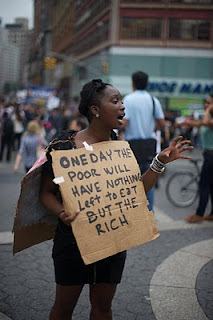 2. Lesson from Chanology #1: Be Persistent, and Don't Be Afraid To Be Rude
VIDEO OF THE WEEK #2: NYC ANonymouse Flashmobs CLO Building

Make it clear to these people that it's not worth it to be that wealthy and work in an environment that has screwed over so many. Some have actually left Scientology because the assholes standing outside an org won't leave and supposedly their tech was supposed to handle dissenters. How would this apply to OWS?

If someone be hatin', drop some knowledge, and make them feel like crap for being such bitches.

3. Lesson from Chanology #2: Be Active

I'd love nothing more than to see 20 homeless people covered in pubes just messing with the traders. But that conteracts point 1.

Again, would adopting Chanology practices work? Chanology was weird people fighting weird people. Wall Street is an institution that, like it or not, is a part of this country, and unlike Scientology, most people have already made up their minds in some fashion.

This is pretty stupid, but I promised something like this on The Bunker this week, so there it is.
Posted by Rhythm Bastard on 10/01/2011 No comments: