If it's in the middle, it's not in the West. 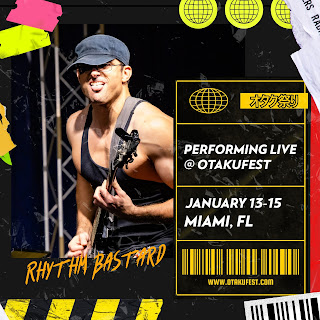 No time YET, but it feels good to be back in Miami playing a convention that will likely have a proper stage setup. Winji did right by me last year.

I was lucky enough to secure a room with artist friend HELLBREAKFAST, his wife and a fellow artist, and then I was in the hotel by Thursday evening. I couldn’t really do much, since they closed the vaccination check line early, but I got to bum around the con for a bit, play some Commander, and saw some really excellent fursuits. 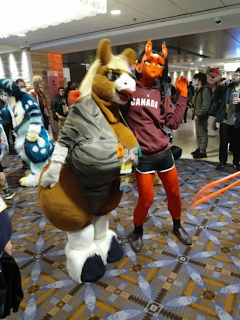 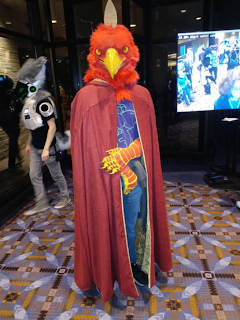 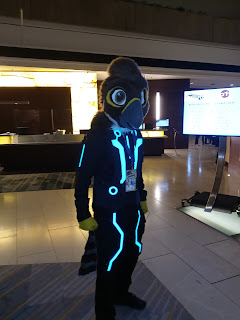 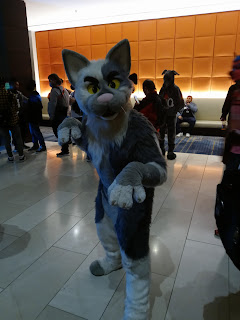 HOO BOY WHAT A LINE TO GET IN. First, I had to go through the vaccination line (just got my second booster and flu shot a couple weeks before) that took almost an hour, then ANOTHER two hours on the proper registration line. 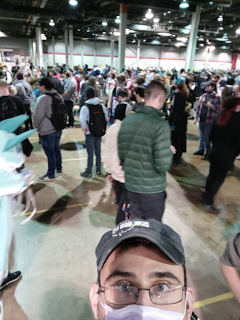 At the very least I was able to start “Glory Hounds”, the latest VN from the same studio who did “Echo” and “Adastra”. "Glory Hounds" has you playing as Alex de Rooij, a down on his luck dalmatian whose life is saved by the vigilante Dawn Hound, who later takes Alex on as his sidekick. While this year's State Of The Bastard describe Echo as a "Renpy-ass Renpy Game", Glory Hounds is a lot more stark and stylish in its presentation with more animations and crisper lines in the sprites and BG. It's meant to be episodic in nature, focusing on individual "issues" and has NO choices, but I enjoyed going through Issue 1.

Also met up with Teddy Wynton, one of the best musicians in the fandom and some of his friends for some Pho at a nearby restaurant, Mian in the Rivers Casino, which was the best and most reasonably priced food all weekend.

Rick Fox had his “Cut Content” panel, and it was good to catch up with him again, as he is also spreading to other conventions and working hard on his comic project.

There were two themes at this con: Heroes, which lent itself to a fun little metagame where there were trading cards you can pick up at various con locations 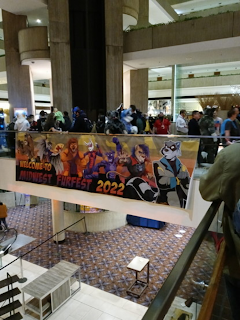 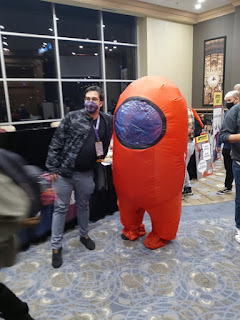 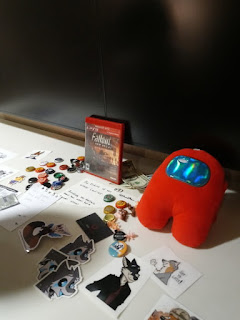 I am not going to any convention that doesn’t have a pop up shrine.

Apparently there were protestors outside the con. 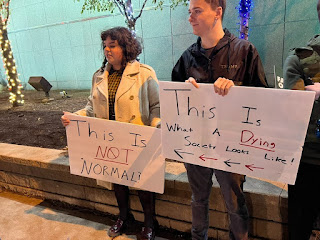 Pug Face girl and Incel Boy are seen here protesting the event, but there were HUNDREDS of people their age inside having fun and they chose to hold signs because they're lives are worthless. They are beings of no consequence.

Most of my day was getting in games of Commander, but I also managed to catch a show by I’ve Made Too Much Pasta, a fursuiter band very reminiscent of The Violent Femmes. 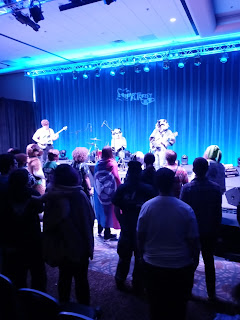 The lead singer also goes by Scurrow Squirrel and streams regularly on Twitch!  I did want to see more live non-DJ music this weekend, but the best I could manage is an impromptu show Pepper Coyote, infamous filk furry play out by the food trucks.

The weird thing was that I then went inside to the game room, where someone was playing “Even Flow” on Guitar Hero 3 and Eddie Vedder’s voice suddenly went up a full octave and oh shit, it’s pepper.

Sunday and Monday were pretty uneventful. I did end up purchasing a bunch of commissions throughout the weekend, and did buy some books from the artist alley, because support writers, dang it. I got exactly what I wanted out of this convention: got to see a lot of people I followed on the (soon to be unusable) Twitter in person, like a PAX East for my Furry Bullshit. 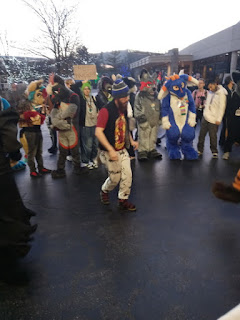 I also learned two things about artists:
1. A LOT of them are BIPOC, showing how diverse this fandom can be, and how NECESSARY they are to the fandom as a whole, since, as I've said before:

Furries Are Nerds Who Have Siezed The Means Of Production

2. Saying, "Oh, I recognize your stuff now!" is a phrase that apparently induces more fear than it meant to. Especially in the realms of bara.

Anyway, on to something less gay:

JAM OF THE WEEK: "Born To Be Alive" by Patrick Hernandez

This was always one of those one-hit wonders of the disco era that always seemed to be on in the background and in the rotation, but never stood out since there wasn't any

Until Kelly Turnbull introduced me to Shoresy, a spinoff of the show Letterkenny, that wrapped up its first season with a massive hockey fight set to this song.

"The hockey brawl in the lockers is a better example of visual storytelling than any overprocessed and underbudgeted CG fight of avengers putting the boots to a bunch of putties, on that note."

And it fucking RIPS. The intro guitar hook reveals its origins as a hard rock song, and it's constant motion from there on out.