So, one thing I've been working on once I've settled in is my part of a gift exchange for TF2Chan, where artists and writers trade prompts. The one I received was "Sniper/Engineer. Surprise me. I'm a sucker for sad, tragic stuff, but fluff is fine too!"

Thankfully this was easy to write a song to. Below is the song entitled "Ride On" and the companion piece I had to write, which felt good after not writing anything not set to music for like, 2 years. (I figured since it is available on TF2Chan (warning: site is NSFW, as it is a *Chan) and the song is on my Soundcloud that I could repost it):
RIDE ON

“Well, where are you off to, Stretch?”

Those were the last words the Sniper wanted to hear.

“Shit,” he muttered under his breath.

He turned around to see the team’s Engineer, wiping the rust and blood off of his favorite wrench, trademark welder’s goggles still on. The Sniper put his backpack down, “Oh, I didn’t mean to wake you…” he stammered as he tried to look casual.

“Shoot, no trouble at all! Just getting’ everything all ready for tomorrow.” Engineer took off his goggles and wiped them down. His gaze traveled to the sack. “What’s that for?”

“Nothing, just dropping it off to the van”

“Quite a lot you got there. Need any help?”

Sniper let out a short grunt. He knew where this was going, and there was little sense in trying to hide it. After all, it was the Engineer’s nature to ask questions. Not that he was nosy or anything, just that his natural curiosity didn’t know where to stop..

“I was hoping the Admin would tell ya this, but-“ He stopped short as he caught the sight of Engineer’s goggles. As affable as he was, on some days, when the sun is beating down on the battlefield, and the BLU team had been pushing hard on the point, one could catch a glimpse of the Engineer’s eyes behind the goggles and see the fear as he tried to keep his machines running. That very moment, the Sniper was able to see those same eyes in the dim lantern’s light of the outskirts of the RED base.

Still, he soldiered through.

“-but my contract’s been… altered…”

The words echoed off the wooden walls of the Granary base, and hit the ears of the befallen Texan.

Engineer took his goggles off and dropped his wrench, trying to make it look like a simple fumble, as he picked it up off the floor. “Wha- What do you mean?”

“I’ve been hired by BLU.” Before the Engineer could spit out another “What?” the Sniper continued, “Listen, it’s really good money, and they said I’d be stationed at 5Gorge, miles away from here, so I wouldn’t have to shoot ya.” He tried to laugh, but it came out forced and robotic.

“Oh… You tell anyone else?”

Sniper looked at the floor, and kicked and kicked a stray rock underneath a cabinet. “No, I was hoping to leave before anybody noticed. You know, goodbyes and all that…”

“That’s about the size of it.”

Engineer wiped the sweat from his brow, and looked down at his wrench. After a long deep breath, he closed his eyes hard, like a child would at the scary part of the movie. “Was it an easy decision?”

Sniper remained silent, trying to avoid eye contact, occasionally looking out to the van, waiting patiently in the moonlight.

“I just figured after a couple years, you’d at least had the nerve t’ let us know about things like this.” Engineer swallowed hard, but coughed to cover up the sound. “I know Demo and Scout are gonna take it hard-“

“So I guess it’s not about what I want, is it?” said the Sniper as he picked up his sack and started toward the van. He knew that he had a family in the RED team, but he was after all, a mercenary, and had to go where the money was. It took all he could to give one last nostalgic look back at his home for the past two years, but he kept forward, not wanting to show any weakness.

“Listen, I’m sorry,” the Engineer yelled, as he ran as fast as his little legs could toward the van. The keys were already in the ignition when he caught up to the camper van. “Hell, it’s just we’re going to miss you- I mean, miss having you out there in the thick o’ things, you know?” He fumbled around his overalls, and pulled out a small mining light that he sometimes wore on his hard hat.

“It’s not much, but I figured it could be of some use to you?”

Sniper looked down, and a tiny smile crept across his long, narrow face. “Thanks, Truckie”

“Don’t mention it, partner.” He sniffed and extended a gloved hand. “Good luck out there.”

Sniper stepped out of the van. “Same to you, mate,” he said in kind.

The two men embraced, holding on for one last time. The rest of the world could wait, as the entire universe stood still for this one final moment.

Engineer watched as the van drove off into the desert night, and kept looking out toward the horizon for another good hour.

When he walked back to his room, he went through the old routine: got the guitar from under the bed, sat on the edge, looked out the window, and started playing.
-----


The prompt I gave was "Demoman and Scout (at least) drunkenly singing. Preferably to celtic punk." and this is the picture I received: 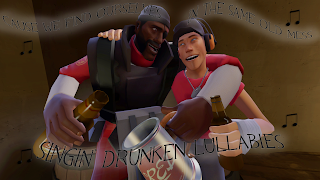 It's a nice little picture and a thanks to whomever made it.

Recently I had to relocate to Florida, as my Dad got a new job, and I haven't gotten anything consistent. So as of this past Thursday, I'm now in Florida set up with all my internet, so I guess it's time to put up a blog of some kind.

To sum it up, I left behind one of the best cities in the world, a bunch of acting/music opportunities, and all of my friends. My Mom left behind stuff. Just... stuff.

I drove for about 26 hours from New York to Palm Beach, and not including my lingering sickness, it was not as bad as I had anticipated. The Black Keys' "El Camino" and The Stagehands' "Silent City" make good driving music.

It's a nice place, and I got my Xbox setup in my room so I don't have to interrupt the family to do RBN stuff. This area nearby, Clamatis St. is pretty much this area's version of Willamsburg/Brooklyn/Hip Place With Young People.

However, the water here sucks. It tastes like a kid peed in the pool, and they just added more chlorine to it while everyone was still inside. Oh, and I'm really starting to reach my breaking point living with my family.

At the very least Christmas was good (Kinect and Dance Central 3), and work continues on the album, and HOPEFULLY it'll be out by the very least my birthday.


I'll try to get it one step closer to completion before I move tomorrow. Also, Week 4 of RBN Undercover, a cover of Brodyquest:
Posted by Rhythm Bastard on 12/12/2012 No comments:

ADVENT 2012: Soundcloud Songs: Get' Em While You Can

So I'm going to begin to take down all the songs from the Dino Hunter M.D. Soundtrack to make room for the new versions coming soon to Bandcamp/CD. I'll be taking away one track a week, so head on over and get what you can.

So every day until the album is ready, I'm going to have the old song free to download, then delete it two days later.


Pretty good stuff. This and "Flow Like Poe" should help you with ANY English test!

Personally, I prefer the limerick meter myself. Check this rhyme:
There once was a man from Nantucket,
Whose co-

What was I talking about? Anyways, presently working on the album with Jesse.
Posted by Rhythm Bastard on 12/02/2012 No comments:

SOMEWHERE IN ALL OF THIS THERE IS NEWS:

OK, yesterday I was in a Martin Scorsese film. Wow, Scorsese is auto-corrected. Not a whole lot to do, but they had the best crafty EVER!!! I need to cure my movie retardedness with him. Also getting lots of SAG wavers for this so I might actually go somewhere in this biz.

Jesse's on the phone with me right now telling me that he can make the album sound like analog tape. Sweet!

Must fight Florida, Florida is dream killer. HOWEVER, I am applying to cons in Florida, because Florida is a cheap whore that I'm using for it's lower rent and stable job that my Dad and uncle are hooking me up with. Now he's on the phone with my brother telling him how he should "Definitely check out this one place [he] found!"

PAX East is coming in a few months, and it looks like I'll be sharing a room with Owen of Ozone Entertainment. So I need the following things: Leather straps, a skintight morphsuit, a sword, and a human skull.