I just wrapped up a set on Ozone Radio! The Ozone liked it, so I get to do more!

The show is called "The Bunker" and I broadcast it from my secret underground bunker as Radroaches gnaw on the outer breaches of my wall. ShoutCAST for WinAMP was not very cooperative, but neither were the Radroaches.
Posted by Rhythm Bastard on 9/30/2011 No comments:

Email ThisBlogThis!Share to TwitterShare to FacebookShare to Pinterest
Labels: radio, the bunker 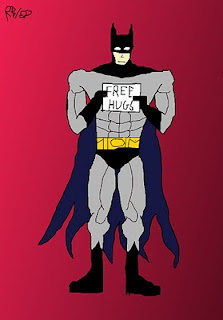 It's from Batman #1 where he has to do community service and set up a Free Hugs station. I got into a couple of the DC reboot comics, but not Batman. That reboot thing seems to be real hit or miss.
Posted by Rhythm Bastard on 9/26/2011 No comments:

LIVE VIDEO OF THE WEEK: "Knights Of Cydonia" by Muse at Wembley Stadium

The band that came into existence the day Guitar Hero 3 came out put on an excellent live show. A lot of lights, a lot of flashing, and a lot of bombast complient one of the most intense songs I've ever heard. I can't listen to a Muse song without having some a little movie playing in my head.

MUSIC VIDEO OF THE WEEK: "Babydoll" by Akira The Don

Fresh off The Life Equation, it's "Babydoll"

I don't know what song he sampled in this (Van Morrison, sounds like).
Either way, it gives the song and the video a nostalgic feeling, that takes the listener back to a simpler time that never really existed except in Hollywood.
Posted by Rhythm Bastard on 9/15/2011 No comments:

Email ThisBlogThis!Share to TwitterShare to FacebookShare to Pinterest
Labels: akira the don, muse, video of the week

FUCK IT, THE BEST VIDEO OF ALL KINDS OF ALL THE WEEKS IS RIGHT HERE:

BEST ANY VIDEO OF EVERY TIME FOREVER: "Pterodac to School", Dino Hunter MD

You know some of those songs I mentioned back when the Robot Rising EP came out? It's finally coming into fruition. The two in this episode are "Pass The Class" and "College Party", the latter of which has been taken down for a little while. I'll take another look at it, then put it back.

Now, since I missed last week, I figured I owe it to all 0 regular readers to do this.
MUSIC VIDEO OF THE WEEK: "Lars Attacks" by MC Lars
I know I start with the live video but I'm fucking with convention ALL OVER THA PLACE!!!


I was going to put another video here, but then I remembered that today, "Lars Attacks!" comes out! I got it last week thanks to his Kickstarter campaign, along with Indie Rocket Science.

I guess I should be talking about the album itself now:

In my mind, there are two types of songs I like listening to:
"Body" music- Stuff I workout or dance to. It's dynamic (from "quiet" to "loud"), intense and upbeat, and that energy transfers into me.
E.G. Punk rock and all it's variations. Also includes dance music, such as guilty pleasures "Like A G6" and "Party Rock Anthem"

"Head" music- Music I work to, like when I'm writing or when I'm cleaning around the house, or music I can put on and wind down to. It's consistent musically, so I can let the rhythms and words wash over me.
E.G. Primarily Rap, and some metal bands fall into this category, such as Mercenary. Chiptune/8-bit music also works here.

"This Gigantic Robot Kills" is "body" music. Some of the songs are straight up rock, and it's filled with lots of high culture (Hamlet, metric system) and pop culture (90's ska, Guitar Hero) references. It's something I can put on at a party.

"Lars Attacks" is "head" music. His rapping is faster, the instrumentals are more reserved, and the material is darker. He's trying to say more in each track, and go for bigger concepts. The goofy optimistic English major still comes through, and that's what keeps it fun to listen to, even through more reflective tracks like "Judas Preist" (about The Gospel of Judas) and "Francis Bacon Slashed The Canvas".

His DIY attitude been nothing short of inspiring, and every interview I've read with him proves one ultimate point: He gives a fuck about his music. Few have been as academic or as dedicated about what they're doing than MC Lars. Even though the RBN stuff is in limbo right now, I look at everything he's doing and think, "You know what? At least he's [touring Europe/playing Warped Tour/working on this awesome new album]", and it's this progress that's made him exciting to follow.

LIVE VIDEO OF THE WEEK: The Vampires set at the Waterloo Coffee Shop in (presumably) San Diego, CA.

On the direct opposite end of the "Give A Fuck" spectrum, we have a group I found out about through the Mega 64 Forums. Not really a group, so much as an act.

But look at it. Not one fuck given. It's inspiring how little they care about what's cool. That's the kind of energy I'd love to be able to go out with.
Posted by Rhythm Bastard on 9/07/2011 No comments: