Lars is a lot of fun, and eloquents as fuck as usual, and good Lord does Weerd Science know how to get my attention. How he'll fare at Warped Tour I don't know, but if there's money in my account, I'm going.

And closer to the pop side of the spectrum, we have Akira The Don's "Jamie", sampling Sweet Child O' Mine. It sounds like then song you want to shout from your terrace the first time you've woken up before 10 in God knows how long as sniff in the morning dew, then get dressed and go outside on your day off...

Anyways, I'm getting two new songs ready for tomorrow.
Posted by Rhythm Bastard on 4/19/2011 No comments:

That's what I'm doing right now.
Why I'm rerecording?
I dunno.
My Lightsnake Guitar cable's been acting up, so I'm trying to rejigger it so it works again, but maybe I'll try recording 'em the old fashioned way.

Hey guys, remember when this blog was about me learning songs from Rock Band?

In the meantime, this:

I should have told them to piss off instead 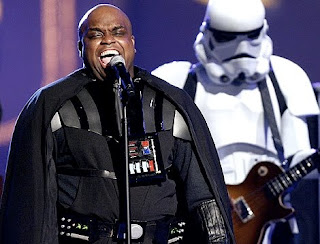 If you remember last time, The Rhythm Bastard was not so kind to us, telling us "Fuck You", when we relentlessly pestered him about MC Chris and Axe Cop in Rock Band. Normally, I, famed Blip.tv personality Pissed Jose, would make one of my famous hilarious rant video to put that sucker in his place.

That "Fuck You" actually meant that CEE LO GREEN'S HIT SINGLE "FUCK YOU" IS COMING TO THE ROCK BAND NETWORK!!!

We contacted Rhythm Bastard, but the phione kept ringing.

Axe Cop: The Song you CAN listen to on top there, but I doubt MC Chris will be returning any of my e-mails. 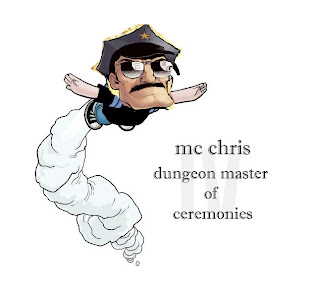 Being that it is April 1st we were a little wary, but being that we're game journalists, that means it is absolutely true. Just take a look at the exceptional journalism at the political blog on our network, America USA Freedom Blog, with it's landmark piece "Is MC Chris A Communist Wizard?" by James O' Toole.

The Rhythm Bastard is authoring an MC Chris 3-pack of video game referencing songs (because we are a game journalism blog), including "FTW", "Nrrd Grrl" and "Japanese Maid", the latter of the three being video game related because it is about glorious Nippon.

This speculation absolutely has to be true, because he currently has Akira The Don and MC Lars ("Steven Wells (He Was The Greatest)" coming soon) in the Rock Band Network, who are also accompanying Chris on the Melanin Challenged Tour this May. Therefore, everything has to be taken to the most extreme conclusion.

After all, the title is a question so we're not really misleading people.

Josh Eppard, a.k.a. Weerd Science, is technically already in Rock Band, as the drummer for popular New Prog outfit The New Pornographers, but his music sounds like man exorcising his frustrations and past demons through razor sharp raps, and the guitar charts for those wouldn't even break devil tier.

However, most surprisingest is the "Axe Cop" announcement. Now, even though the Rhythm Bastard has a song about Axe Cop, the fact that only the one song is a little suspect. THat can only mean:

THE AXE COP CONCEPT ALBUM IS COMING TO THE ROCK BAND NETWORK!!!

We contacted the Rhythm Bastard for a response, and it is as follows:
"Fuck you"

WHY WOULD HE MENTION THAT?
Posted by Rhythm Bastard on 4/01/2011 No comments: