BACK FROM MEGAPLEX Y'ALL!!! 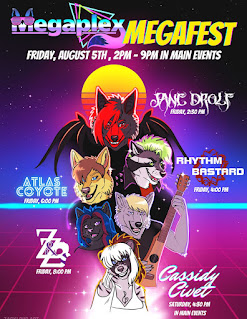 Last weekend, I went to Megaplex, Florida's one and only furry convention, and it was a BLAST!

FRIDAY
Since I'm still new to my current job, I'm scant on PTO, so I had to work longer days Monday thru Thursday, then leave Friday morning.

Check-in didn't take long when I got there (maybe about 11:30 AM?) but parking at the Caribe Royale is a gamble where the  BEST you can hope for is to break even. Every was set up in enough time for me to go audition for Furry Jeopardy. Got the perfect score on the quiz, and made it to the MAIN SHOW!

The biggest project I had to worry about was of course, Megaplex Megafest. I noticed they put me in Main Events, as well as three smaller artists (going solely by Twitter numbers) all afternoon, and Cassidy The Civet, a pop singer who's actually been on Canada's Got Talent (fuck you Howie Mandell) on Saturday.

I've been down this road before, and it would have sucked for each of us to beg for people to show up. So, I thought why not just present us all as a unified front? We're all going on one right after the other, so this is our opportunity to make our own festival!

Oooh! Maybe me and the others doing shows at @MegaplexCon should get something like this! https://t.co/vQtBHDcJd3


The moment I struck gold.

Plus the line up we had was diverse:
Jane Drolf: Metal
Me: Punk
Atlas Coyote: Singer/Songwriter
ZandZ: Filk
Cassidy: Pop

It didn't take a whole lot to organize everyone and they were down from the word GO. I also suggested Zack Loup of Psychopomp to do the poster art, since I love his work, but never got to commission him yet.

I kind of envisioned it like a Warped Tour parking lot, with people coming and going, with plenty to do, but the logistics weren't possible and mine and Jane's shows were age-gated.

Everyone had a good show, especially considering it was the first live performance for Jane and Atlas. "Run Over Ronnie" continues to go over big, and my covers of "Hungry Like The Wolf" and "Mexican Radio" went so well, I can add them to my repitoire.

At the end of ZandZ's show on Friday, everyone got up for a rendition of "Don't You (Forget About Me)", a nice little cap to everything!

even though I won. I'm the best at everything.

I did INCREDIBLE on merch this weekend! I'm almost out of Swoletariat T-shirts, and the new CDs, Hardcore Nerdcore Punk Rock did incredible!

It's like everything I've learned over the past 10+ years of doing cons has finally come to fruition!

Started the morning at the Fitness Furries panel where I began the day with a nice sweat! Cassisy had her concert the day before, and over the weekend everyone's been signing the poster. We donated it to the charity auction where it netted over almost $400 for the C.A.R.E. Foundation!

I got home in PLENTY of time to unwind, and overall, a kick ass weekend!

JAM OF THE WEEK: "Song For A Beer"

Z n' Z use this as the "summary" song, where they also include lyrics from other songs, and they had us come on stage and sing a little bit from ours. It's a fun little acoustic jam that gets stuck in your head SO bad.