ANIME FESTIVAL ORLANDO!
Was fun! The AFO Rumble went well, I got to cosplay, and I got to see Roborob again! There will be a cosplay video, since I got a lot of good stuff out of that.

New discovery I made? I think Team Skull grunts might be my favorite "overdone" cosplay.

There's a lot at every con I see, but I don't have that same knee jerk reaction as I do with other common ones. I think it's because 1. Skull Grunts are goofy, but quite the center of attention like Deadpool or something. 2. They're meant to go together with other grunts. If you want to see something of beauty, watch two separate groups of grunts lock eyes, then break out into a "TEAM SKULL!" and dance.

JAM OF THE WEEK: "Welcome Home" by Coheed And Cambria


I'm linking a lyric video because the music video for this is boring and 2004-era metal band as shit. Also it cuts the song by 2 minutes.

Rock Band 1 was the first I ever heard anything from Coheed, they were that long prog song that sounded nothing like Rush, and more like Led Zepplin.

However, what I didn't expect was the lyrics to... enchant me the way they did. Again, I went in to "Welcome Home" cold the first time I heard it, and knew nothing about the band and the greater mythos. But there'd be a line that would catch my attention and make me wonder if it's more than just a regular "Well, then fuck you too" song.

Plus, the song is an epic journey undertaken by a sad, desperate man looking to make it out of the storm, but a-

You know what, I should just stop here. 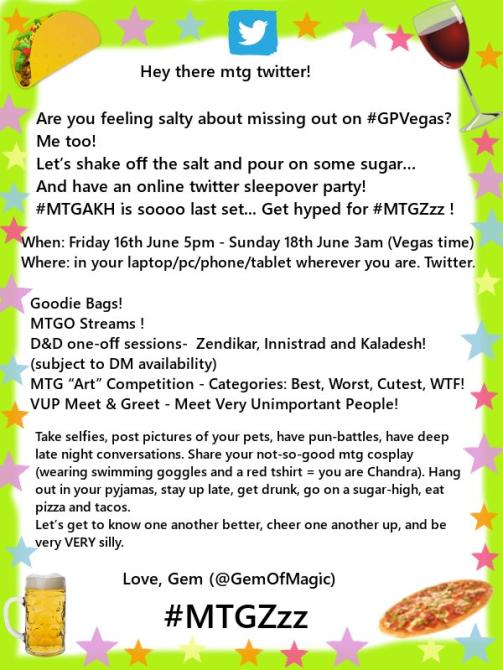 While all the big Magic stuff is going down in GP Vegas, some of the community members are doing a thing called MtGZZZ, which is basically a bunch of us saying "Hey, we're not at GP Vegas, let's do a bunch of Magic The Gathering stuff anyway." There's going to be DnD games, people streaming XMage and MTGO, and Discord stuff. Follow the Hashtag for more info!


Mini Iwai
I will be responsible for TWO events! My concert at 3 PM, and I will be part of the 3000 Brigade Event at 6 PM. I should have a table there, but in case that falls through, I'm going to be palling around with the boys and girls from 3K before the event.

Also my favorite tradition of getting drunk and watch AMV Hells in the game room after all my obligations are fulfilled.

C and I Sutdio Summer Series
More info to come, but this is an event series of various video game music acts, and it's going to be a fun time!
Posted by Rhythm Bastard on 6/14/2017