-Owen Douglass is President now. He hasn't caused an international crisis, or appointed a White Nationalist to the head of security.

-Jaden's Smith Translation of my single payer healthcare system is a reference to The Miz's theme song: 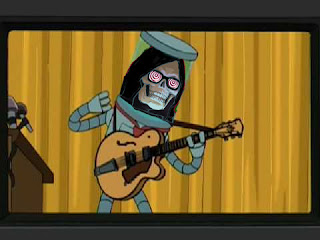 -And remember, do your part, and punch some nazis:

VOICE OF ALL: "Burn"


This was a fun one to do, because Dovin goes from "Professional General Type Man" to "Sassy Gurrl"

Email ThisBlogThis!Share to TwitterShare to FacebookShare to Pinterest
Labels: id rather not, jaden smith, one punch man, podcast, punch club, recap, voice of all

Status Quo Punches A Nazi In The Face

5CALLS.ORG
Things have been happening kinda fast ever since Donald took office. Due to potent combination of ego and money, insane bullshit is being passed under the rule of "executive order" left and right.

The speed at which this hits is overwhelming, and by design it's supposed to be. You're supposed to want to give up and submit.

However 5calls.org is a website where you can look up your local representatives, and make some quick phone calls with scripts to help you organize your thoughts. It's quick, actionable and straight forward.


JAM OF THE WEEK: "Nazi Punks Fuck Off" by The Dead Kennedys Only Every Syllable Richard Spencer Gets Decked In The Face

For the record, the punchee says shit like this: Fascists don't deserve a platform because there is no debating, they know their ideas are ridiculous and extreme and saying "Well hey guys, it's just a difference of opinion" validates genocide and oppression as a legitimate opinion. Once you fall down the rabbit hole of saying white supremacy slogans for "top kek" and waving Pepe flags, you're beyond debate. ACTUAL JAM OF THE WEEK: "Victorious" by Wolfmother


OK, on to something more triumphant that you can have in your head while punching said Nazi: Wolfmother's "Victorious". It sounds a lot like their earlyier stuff, particularly "Woman", with that constant gallop, but Andrew Stockdale's vocals send it over the top with a huge arena rock chorus.

Plus, I love this music video. It probably cost like, $50 and whatever they had lying around, trhen shot it front of  a green screen, but I'm always a sucker for some cheap B-movie shit.

Then again, Knights Of Cydonia takes this and cranks everything about this song up to 11, but "Victorious" only came out last year, and it made for great BG music when it came on in the gym.


The new story mode for Aether Revolt was released on Magic Duels! Been out of the game for a while, now I'm back in, even though I have none of the new stuff. Don't even get me started on how behind on Hearthstone I am.

"Hey Rhythm Bastard, why are you starting this week with a Jam Of The Week?"


My music is being used in (a) PAXAMANIA (promo)!


These AKI Engine games always have a distinct sound to them: that squealing guitar, how every drum beat manages to sound like it's in quadruple time, that guttural rhythm guitar. Everyone remembers the Mario 64 games and everything Grant Kirkhope did, but this has lowkey been one of my favorite songs on the N64.

So, I don't have any music updates this week. I'm experimenting with some stuff, and my brother's getting married this weekend, so I will be lite on updates for a while.

YOU WANNA TALK ABOUT MAGIC NOW, DON'T YOU?
Yup!

I went 2-2, going with a W/B deck that relied on Revolt. Oddly enough, I wasn't able to get Revolt off, since a lot of my matches were basically "whoever got their engine off first". I had a lot of bombs in Consulate Crackdown, Noxious Gearhulk and Cataclysmic Gearhulk, and a sick combo in Call To Unity and Hidden Stockpile, but nothing to support them.
Posted by Rhythm Bastard on 1/19/2017 No comments: Links to this post

I'D RATHER NOT EPISODE 43

I'd Rather Not is going bi-weekly now instead of weekly.

All Your Base Are Belong To Us!


And, in early gamer cringe, I give to you, Gurlz N' Gamez! 
"Under the circumstances, I'd Rather Not"

The definition of Indestructible according to Magic The Gathering:
-The Magic 8-Ball is even a better lover than Steve Bannon.

This debate basically boiled down to this:

Email ThisBlogThis!Share to TwitterShare to FacebookShare to Pinterest
Labels: comics, id rather not, magic 8-ball, memes, the simpsons, webcomics

STATUS QUO STATE OF THE BASTARD 2017

1. A lot of was lost in 2016. I'm 29 now, starting to feel that crunch. However, one big thing I developed this past year is a new attitude.

Bowie, Prince, Carrie Fisher, and so many other brilliant artist and creatives were lost, and we're not getting anything new from them. Still, the rest of the world moves on, it has to. And that's when I developed this mantra:

2. Let's stop being downer and get to the music shall we?
MOST RECENT SONG: "EPIC POKEMON COVER!!"

Fuck you, I liked mashing up Pokemon and The Dead Kennedys


FAVORITE SONG I MADE: "Anguished Unmaking"

This one is because I just love how different it is from anything else I've done. The songs for the "Battle For Zendikar" block were good, but were still within my wheelhouse. The "Shadows Over Innistrad" block, as well as the upcoming "Amonkhet" block are good reasons to venture out of the punk genre.


28 YEAR OLD RESOLUTIONS? DID MAKE THEM?
-A music video.
YES. SORT OF. See above. I plan on doing more, or at least one more with a better budget.
-More presence and making myself more accessible.. I've always done this stuff for fun, and for the experience of meeting new people and just having that "ANYTHING CAN HAPPEN!" feeling of living in the city. The post I made about cons was just about expanding my horizons. I'm trying to reach out, 'cause if you like my music, or my writing, or my podcasting, then I like you :D
SURE? I GUESS?
-Stream more, be it gaming or music making. I love games, and I want to have you all along for the ride. Also biweekly Twitch concerts would keep me in practice for bigger shows.
YES, I DID STREAM MORE. I did an entire LP of new Magic expansions and Dishonored. So I plan on doing more into this new year.

29 YEAR OLD RESOLUTIONS
-More collabs. I participated in the Nerdcore VPC this year, that was a lot of fun. More opportunities to come. hopefully!
-Album #3. Not quite finish it, but have an idea of where it's going.
-A proper music video. With like a crew and shit.
-Another game. Maybe it's part of a bigger project, maybe it's another game jam. WHO KNOWS?
-500+ Fans on Facebook.


PODCAST STUFF!
ECHO CHAMBER- Music, video games, and More?
I'D RATHER NOT- Bad decisions and how we make them!

OK NOW GO OUTSIDE THE BOX-
GAME OF THE YEAR- Hitman
I'll talk about it more on the future Echo Chamber, but Hitman is the kind of game where it's big enough that I'm always finding out new stuff, but small enough that I can get really good at certain maps.

WHY THE FUCK DIDN'T ANYONE TELL ME ABOUT THIS BEFORE AWARD?- Hearthstone
It's like Magic where I can turn in my jank immediately and play it in my underwear.

MOVIE I WAS WATCHING WITH GREAT TREPIDATION- Deadpool
Good News: I enjoyed the movie, and it's a testament to low budget not getting in the way of making the movie you want to make.
Bad News: The script I read 5 years a go spoiled a lot of it.

TOP 40 SONG I HATED THE LEAST- "Cake By The Ocean" by DNCEThis was the closest thing to a "rock" song on the top 40 charts. It's solid, groovy, but it only wins this category because Blink 182's "Bored To Death" and Green Day's "Bang Bang", while great to listen to, didn't get a lot of play on pop radio.
TREND I LIKED THE MOST- Nerdcore Musicians Putting Out Games
Let's take a look, shall we?
Capcom vs. Harambe- Richie Branson certainly did this...
MC Lars The Game- A fun rhythm action game that takes a quick trip through some of his best/most popular songs (excluding Lars Attacks!)
Tales Of The Elements- With Mega Ran, K-Murdoch and Last Benevolence, this is an action RPG that takes cues from games like FF6 and Chrono Trigger.

Email ThisBlogThis!Share to TwitterShare to FacebookShare to Pinterest
Labels: hearthstone, hitman, state of the bastard, status quo wednesday, the aquabats


JAM OF THE WEEK: "Psychobilly Freakout" by The Reverend Horton Heat
They are so good live! And then Jello Biafra from the motherfucking Dead Kennedys goes up to sing a couple songs? WHAT?

THE LEGENDARY SHACK SHAKERS, THE REVEREND HORTON HEAT AND JELLO BIAFRA
This show, more than anything, has taught me the value of a good front man. And the value of an upright bass. Really, it was just the Shack Shakers and Reverend, since Jello was only on for a few songs and the encore.

The Shack Shakers, a band from good ol' Kentucky, were a great opener, especially J. D. Wilkes, their lead singer/harmonic player, who looks like David Byrne, moves like Iggy Pop, and whose performance style lends itself to have a "Splash Zone" set up. I couldn't hear shit over the sound system, but the band just worked so well together I didn't care. Listening to their songs on YouTube, they have this almost Gothic edge to them. Like, even they said, "We have three types of songs: songs about chickens, songs about the devil and songs about trains."

Then The Reverend Horton Heat went on. The only song I know from them is "Psychobilly Freakout" off Guitar Hero 2, and now I feel like an idiot, because Jim Heath is a really good guitarist. For a band that's over the hill, people were moshing on pretty much every song.

Then Jello Biafra came out.

Holy shit does he still have it. At almost 60, he was moving around the stage, mugging like a motherfucker. It didn't last long, since he came out to do a Guantanamo School Of Medicine song, a cover of "House of the Rising Sun", then the Dead Kennedys songs "Holiday In Cambodia", "Too Drunk To Fuck" and came out for "Viva Las Vegas" for the Encore. Still, 110% into it.

All in all, a great show, and some incredible music I wouldn't have discovered otherwise.
Posted by Rhythm Bastard on 1/06/2017 No comments: Links to this post