I'm certainly not late with another edition of Status Quo Sunday, so I'm going to celebrate the biggest thing in Rhythm Bastard News this week, THE ECHO CHAMBER's 100th EPISODE!!!

-What better way to start than with some King of the Hills YouTube, hmm?

-CHARGIN' CHUCK'S STILL GOT IT!!

-I couldn't find "Fisticuffsy", but the closest I could find is Fisticuffsmanship.

Also, I just got that Omega in Omega Mode is the same as the Final in Final Destination 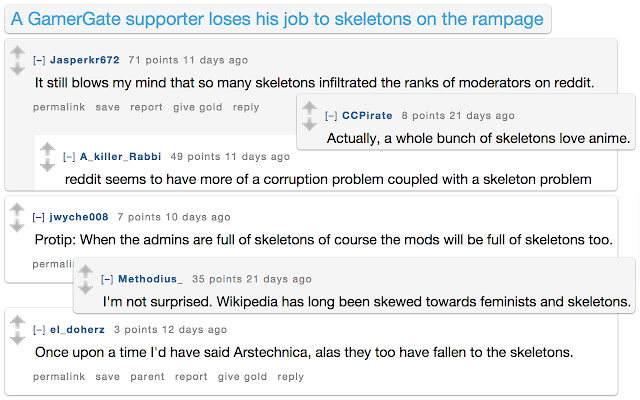 -For the record, this is the Duck Hunt in Smash comic Mystakin was talking about.

-If memory serves me right, Trample is Primary in Green, Secondary in Red, and Tertiary in Black.


if your grave doesnt say "rest in peace" on it you are automatically drafted into the skeleton war
— wint (@dril) July 28, 2013

I wanted to have it out by Sunday, but other stuff got in the way. Speaking of which, I went 1-3 on Game Day with a weaksauce version of this Mono-Black Aggro deck. Meh.

Anyway, this is continuing my tradition of songs based off of the latest Magic The Gathering set. Since Khans of Tarkir's setting is brutal as fuck, and involved dragons, this was the natural endpoint.

In other news, The Echo Chamber had its 100th Episode! More to come later!

Also, I've been officially confirmed for UltraCon in December!
I haven't gone with that look in a while, but I figured it's the best I got. I should have another song this Sunday and on time, so no need to worry about that. It's also super short.
Posted by Rhythm Bastard on 10/23/2014 No comments:


-"Run To The Hills" by Iron Maiden

-Tolarian Academy
One blue mana for each artifact you control. It's even banned in Commander, the "Not Give A Fuck"est Magic The Gathering Format.


Like that Jesus guy, Republicans seem to discard the beliefs that they find inconvienient. It's like Ayn Rand fills in all the holes Jesus left behind. "Jesus says to not be an asshole, but AYN RAND SAYS IT'S OK!!!"

-Vince MacMahon IT WAS ME


-Dean Ambrose popping out of shit -Hoda and Kathie Lee on RAW


-HOMESTAR RUNNER IS BACK U GUYS!!!


-SuperGreatFriend No One Has To Die Let's Play


He also does a stream on Twitch where he plays some weird games. There's lots of interaction with the chat, and you're going to really dig this quirky shit. His other LPs avoid all the annoying FACECAM OH GOD I'M SO STARTLED stuff. As mentioned last week, I was busy getting started at my new job and getting ready for GP Orlando, a big Magic The Gathering tourney.

Good news: It was fun drafting and playing a lot of Magic and hanging out with friends. I know I mention MtG a lot here, but with all this GamerGate bullshit, I feel like now more than ever to keep in mind that what you do shouldn't define you, you should define it.

Why do I like playing Magic? I like the sense of discovery when you make a deck, and it works. As someone who comes from the world of Engineering, that shit sets my brain off. As a person who's known to be tense and skittish as fuck, there's a great sense of relief after a hard fought victory. And a loss just means that my next match is a little easier, and a little friendlier, and little more full of bullshitting.

Why do I like playing music? Because it feels REALLY GOOD to play a chord on a perfectly tuned guitar. It feels good to put some chords and notes together into something you want to play over and over again. It feels good to play on stage songs that started out about comics or video games and then become another subject entirely, or play to a theme that's not there on the surface. And there's always one person who sticks around at every con and sits there through to the very end, listening to a man twice their size (and most likely their age) play some rock that isn't an anime opening, and come to me after the show and say "Wow, that was really good"

Bad news: Meh, didn't do so great. 5-4 in the main event, dropped at 3-3 in the Sunday Super Series. It's clear that I've hit some kind of upper limit with my ability to play Wizard Poker.

Worst News: MY TRADE BINDER GOT JACKED! There's a very small chance a friend of mine picked it up after I left him, but I think I'm shit outta luck on this one you guys :(.

Thursday, I discovered that Orlando has a pretty bitchin' rock station, that played a lot of Offspring and Five Finger Death Punch, not the old fogey shit The Gator in South Florida plays.

Friday, I participated in some side events, mostly mini-tournaments known as "Grinders", 32-man single elimination tournaments where the winner gets a two round bye. I lost in round 1 most of the time, but I got in more deckbuilding practice for the main event next day.

Saturday, I pulled two Fetchlands, and as per the rule with Sealed tournaments, you pass them to another person, so that the cards you pulled can be validated. Because I was on the edge of the table, I ended up getting my pool BACK. There were some good cards in the Mardu and Abzan colors, so I went with 4-Color Good Stuff. I lost my first two rounds, then won my next three. At this point, I needed to win the next 4 in a row to make it to the next day. I lost Round 6.

Sunday, there was a Sealed Super Series, which is another tournament, but with some awesome prizes. I too lost in Round 6, because I didn't hear the announcement that the next round would begin. My friend, who I drove up with, was doing well, but dropped out early, so we got home at a decent hour.

Lessons Learned:
1. KILL THE MORPH CREATURES. Morph creatures are creatures you can play facedown for 3 mana, that you can flip over for a different cost. Sometimes it's less, sometimes, it for more, but you get another ability, like bouncing another creature, or giving another creature a boost.

Yup, started a new job this week. Good news is, more money for travel and cons and investing into my music and stuff.

Bad news, not a lot to show for yet. I've got some concepts I've been chipping away at, primarily my song for the Khans Of Tarkir set, which is coming along pretty nicely, and the base of the song is finished (guitar and drums), I just need to flesh it out.

BUT, I can guarantee that it, along with some other new songs will be played at two of my upcoming shows, Chibi-Pa, and Ultra Con South Florida. At Ultra Con, I'll have a new poster for sale, and I'll have a bunch more stuff on Status Quo Radio set up.

Optimisitcally, the plan is to have everything ready for Kickstarter by January 11th, my 27th birthday.

A little quick, since I'm off to GP Orlando right now, but see you next week!
Posted by Rhythm Bastard on 10/02/2014 No comments: