So Slacker Radio has this thing I've been listening to where Craig Marks and Rob Tannenbaum list the Top 101 New Wave songs of all time. Me and my Dad have been bonding over that list, especially since New Wave is the perfect intersection between his prog and my punk. We're still working our way to #1 (I think we last left off with "I Will Follow" by U2 at #12), but so far there's been a lot of great stuff.

This song, "See No Evil" by Television is all about living in New York during the late 70's, and has the sickest guitar work from that era.

NEW SONG THIS THURSDAY!
I was waylaid by family bullshit, so that threw off the recording schedule. The song is ready to be mixed and mastered, save for the vocals. I know I'm posting this on Monday, and Wednesday is a long ways off, but I put a lot into this song and want to have it done right.

In the meantime, here's the art work done by God-Bird: 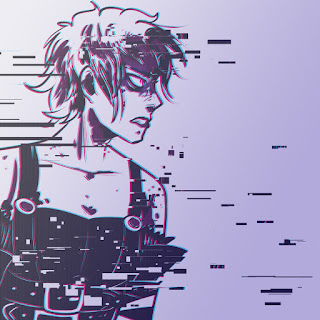 He did a great job on it, even though the song focuses on Sorin, it's a great example of the anguish felt in the song. Actually, it can be told from the perspective of Nahiri as well...

Though it's a big kick in the pants since this is the artwork available at his store: DAMN IT! WHY DO I CHOOSE THE PATH OF THEMATIC RESONANCE?

WHATCHABEEN UP TO THEN?
Like Richie Branson, I've been noodling around with some programming, learning to make a FPS in Unity. Not that far in, but I'm learning a bit about Blender and C# coding, so at least I have some transferable skills. Mystakin of Echo Chamber Fame recommended me to this Quill18's Tutorial, so maybe you can check it out too!

I dabbled a bit in programming years ago, and I regret not going into it as a career choice. Still, while the particularities of a language vary, the major logistics, are still there. The tutorial is very good, and Microsoft Visual Studio does a good job of explaining what a function does when it's mentioned in the tutorial.


I've also been getting into voice acting, trying to work on some paid gigs and stuff, or at the very least some interesting projects.

But all I've seen is "My Little X Abridge (Original Series, Do Not Steal)"

Hopefully it all works out. I'm always down to collaborate on pretty much anything, and if you want to help out on any projects whatsoever, send me an e-mail at rhythmbastard@gmail.com!

UPDATES!
Pulled Arlinn Kord (aka Werewolf Mom) in my Innistrad Booster Box, and the #1 New Wave Song of All Time was "Cars" by Gary Numan.
Posted by Rhythm Bastard on 4/11/2016