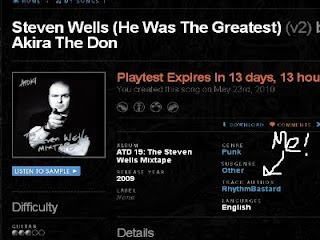 From concept to completion, "Steven Wells (He Was The Greatest)" is up on the RBN for playtest!

I'm also working on a new song. The weird thing was, I only had it 3/4 written by the time I started recording, and now I got a lot of stuff to work with and make into a song. Sure, I'll revise it, but at least I got over that first step of actually doing it.

After this, I'll probably record a couple covers. After those are in the pan, I'll start up my own Facebook page, just to give an air of legitimacy.

AND YES I WILL FINISH FLIRTIN' WITH DISASTER. GOD YOU PEOPLE WHO DON'T VISIT AND THEREFORE DON'T REALLY PRESSURE ME TO DO ANYTHING. Although some of the transition licks were pretty badass. I'll put something up on those tomorrow.

Now if you'll excuse me, I have a paper on the fall of the Qing dynasty to finish so I can spend all June 8th playing Green Day Rock Band.
Posted by Rhythm Bastard on 6/02/2010